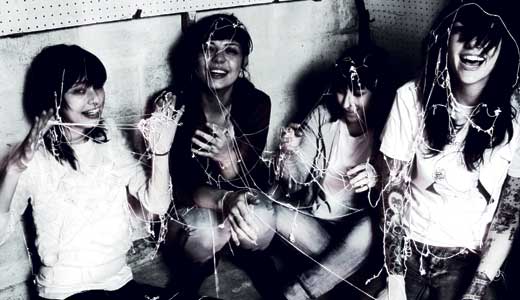 Faux heckling aside, The Coathangers maintain an easy peace with audience.lamar george

Candice Jones maintains an intriguing theory: When an audience member at a Coathangers performance hurls invective and taunts toward the stage, it isn’t typically done out of genuine malice. Instead, the derision comes from a desire to be derided in return.

“People love the abuse that they get when they (heckle), asking you to yell something or to throw a drink on them,” says Jones, keyboardist for the unkempt Atlanta punk quartet. “It’s really, really weird.”

The confirmation of Jones’s hypothesis comes from what happens when the band is finished playing. “The people that are yelling the loudest — ‘Get off the stage!’ — are the ones that come up afterwards and tell us, ‘We loved it! It’s great!’”

During a car trip to an anti-Bush rally in D.C. a few years ago, the four females who would become The Coathangers joked about starting a band, devising monikers to go with it. When they got home, they picked up instruments to expand their idea, but there was one significant snag: No one really knew how to play anything.

“I had taken piano lessons growing up,” Jones says. “I knew my notes, but playing keyboard in a band is really different from playing piano.”

Guitarist Julia Kugel grew up in Russia taking classical guitar lessons but “had never played a power chord or used a pick before.” Stephanie Luke had little experience on the drums, while Meredith Franco, would-be bassist, “had never picked up any stringed instrument.”

None of this intimidated The Coathangers. After all, reveals Jones, “We weren’t trying to really be a band. We were making up songs and amusing ourselves.” Instead of working around a predetermined concept, the novices cobbled compositions together using whatever they could concoct: a bass line here, a drum beat there.

By sticking to their no-frills style, the foursome found their aesthetic. Scramble, the band’s recent album via Suicide Squeeze Records, was laid down in all of one week. Setting up the equipment in their practice space, the gang spent two hours a day rocking “until we got tired.” The producer’s primary job was to “just push Record.” They’d perform the songs twice or thrice, preserving the best take and occasionally re-recording vocals. The result is a jangly sugar rush propelled by an off-kilter sense of humor (tracks include “Arthritis Sux” and “Gettin’ Mad and Pumpin’ Iron”), wild playing and the caterwauling of all members.

As an all-girl group, Jones and company take pride in their antics. “You’re not allowed to make ugly faces or screeching noises. Those aren’t considered beautiful or ladylike.”

Still, The Coathangers don’t want anyone to get too comfy. “Just when people think all you are is screeches and scratches, we’ll sing a nice melody,” she says.