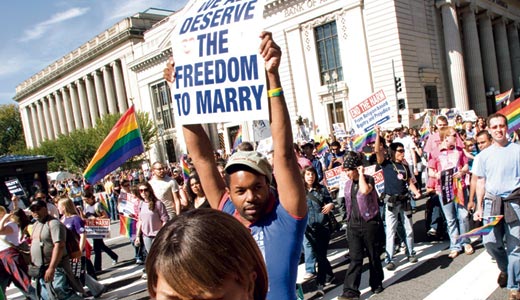 Louisville resident Chiquta Baker, 53, and her two children, Yana, 30, and Daniel, 22, stand with a group of fellow Kentuckians waiting for the National Equality March to begin.

A rainbow painted on her face, Chiquta Baker straightens her rainbow-flourished belt. “I didn’t know when I got this (belt) what it meant,” she says with a laugh, referring to the fact that the rainbow is a symbol of pride in the LGBT community.

Both of the Baker children came out when they were teenagers; Yana was 16 and Daniel was 14. This is the first time the family has ever vacationed together.

On this day — Sunday, Oct. 11 — tens of thousands of gay, lesbian, bisexual and transgender individuals and their allies have converged on the District of Columbia for the National Equality March. Organized in less than five months, the grassroots event is a major push for full and equal protection for LGBT people in all matters, in all 50 states. The fifth of its kind in our nation’s capitol, the event marks the 30th anniversary of the first march on Washington for gay and lesbian rights. Also, Oct. 11 is “National Coming Out Day,” founded in 1988.

The Fairness Campaign of Louisville endorsed and publicized the march locally, recruiting 50 residents from Louisville and Lexington to travel by bus to D.C.

“It became really clear to us that young people seemed really engaged in this march,” says Chris Hartman, director of the Fairness Campaign. “We wanted to be there to support them.” In response, the Fairness Campaign organized the “Equality Express,” a charter bus to transport supporters.

Just days before the national march, the U.S. House of Representatives voted to expand federal hate crime laws to include protections for those victimized because of their sexual orientation. The legislation includes the name of Matthew Shepard, a gay college student who was brutally murdered 11 years ago outside the small town of Laramie, Wyo. The Senate is expected to consider the measure — nicknamed the “Laramie Bill” — later this week.

Pushing for rights on a national level has long been a top priority of LGBT activists, and it’s something President Obama addressed when speaking to activists the day before the march. During his Saturday speech, Obama pledged to repeal the military’s “Don’t Ask, Don’t Tell” policy, which prohibits gay members from disclosing their sexual orientation, and vowed to reverse the 1996 Defense of Marriage Act. They are promises Obama made during his campaign for president, and although his failure to follow through thus far has prompted criticism from restless activists, last weekend’s march seemed to renew hope on that front.

“‘Don’t Ask, Don’t Tell’ is not only I think morally wrong, it’s also counter-productive and actually leads to a great waste of resources in the military,” says U.S. Rep. John Yarmuth, D-Louisville, who co-sponsored legislation in the House to repeal the policy. Yarmuth recently voted in favor of the Laramie Bill as well.

Meanwhile, activists on the local level are pushing for a statewide fairness law. According to the Fairness Campaign, LGBT fairness laws exist in only three parts of the bluegrass — Covington, Lexington and Louisville, leaving a large chunk of the commonwealth’s residents vulnerable to legal discrimination. Nationally, fairness laws have been adopted in 20 states and the District of Columbia.

“I think our experience here in Louisville indicates there isn’t any adverse effect, and (the fairness ordinance) actually, to a certain extent, is an economic development tool because many bright young people look for things like tolerance in a community when they are deciding where to live,” says Yarmuth, adding that a state fairness law would “make a great statement about Kentucky.”

In reiterating their belief that a statewide fairness law might soon become a reality, activists point to victories in recent years.

For example, the American Civil Liberties Union of Kentucky settled a case in northeastern Boyd County where several students of the local public high school were prohibited from forming a “gay-straight alliance” club. A lawsuit ensued, and school officials ultimately agreed to accept the club, and to require anti-harassment training in the district.

Louisvillian Yana Baker became an activist for the LGBT community soon after coming out. Describing herself as a transfemale, Baker says she has experienced various forms of discrimination over the years. She felt compelled to attend the National Equality March given her activism on the homefront, which includes founding the Transgender Education Center of Kentucky, serving on the Fairness Campaign’s coordinating committee, and as co-chair on both the Dismantling Racism and Community Building committees.

“My mom used to always say, ‘If you’re not a part of the solution, you’re part of the problem,’” Baker says. “If I’m not working to change, I have no right to complain, and I’ve always taken that seriously.”

Needless to say, Chiquta Baker is pleased with what her daughter has accomplished as an activist: “I’m really proud of Yana. She sticks to what she believes in. If she sees something she wants to do, she goes out and does it.”