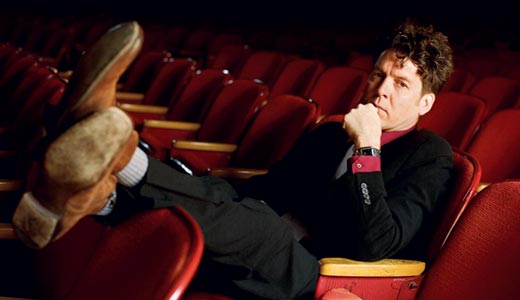 My near-idolatry of singer/songwriter/producer Joe Henry is well known to my friends, so it was with great pleasure I was able to interview, via e-mail, the producer of new classics by Allen Toussaint, Bettye LaVette, Elvis Costello and Solomon Burke. He’ll be in Louisville as part of photographer Michael Wilson’s exhibit “Whatever Happened to Martha” at the 930 Listening Room on Friday. The show is free and seating is on a first-come, first-served basis.

LEO: The music you create achieves a sound I don’t hear in any other modern music. How much of your sound is a conscious effort, and how much is happy accident?

Joe Henry: Whether working for myself or for others as a producer, I strive not to have a signature sound. Having said that, I guess it would be disingenuous for me to suggest that I don’t recognize a sonic thread running through most everything I do, and what I think you hear is not an accident: My goal is always and only to illuminate the artist and illuminate the song, but to do so leaving as much mystery intact as I can.

LEO: Your appearance is tied to the opening of Michael Wilson’s photo exhibit. Your covers tend to be photographs that play as a window to each album’s mood. How involved are you in their choice, and in what stage of an album’s creation do you choose?

JH: I have for most of my record covers used a piece of existing art … that I felt some instinctive connection to. It has been like adding another instrument to a track and feeling the picture open up, to connect the music to a visual that speaks from a particular point of view. I am enthralled by that engagement and the accident of it that is most always a part of the union, ultimately. I take the package design very seriously. It is most listeners’ first door into the music. As for this show in particular, I have known Michael Wilson for a dozen years or more and have always admired his approach and sensibility. It’s great to approach a performance understanding that it must exist within a particular context like this one.

LEO: Have you made your dream project yet?

JH: No. My “dream project” is always the next record for me. I’d love to make a record of my own using a full orchestra live in a studio, with elements improvised. For such a thing, I might write in the shape of standards, but with lyrics that operated on a bit of a different plane. I have experimented with this idea a little, but haven’t quite found the thread.

LEO: You’ve been outspoken politically over the years. In Obama’s victory, we seem to have traded a scary Beltway for an even scarier Bible belt. What are your thoughts on Obama’s presidency?

JH: I don’t believe we’ve traded anything for the intolerance we’re seeing; I just think that boisterous faction is desperate, feeling vulnerable and is thus giving voice to their hatred, i.e., their fear, the root of every human failing.

When I was recently watching a rough cut of Harry Belafonte’s documentary on his life, I saw the clips of Harry helping carry Dr. King’s casket through the streets of Atlanta in 1968, and though it looks like the distant past in the archival footage, I had the shock of remembering that I was there, in Atlanta, in that moment in time.

So no, it doesn’t seem like an evolution as much as a refusal of one. But for those like the Southern senator who recently said he fears that his children and grandchildren won’t grow up in the same America he did, I say I don’t want my children or grandchildren to grow up in the same America I did. To the so-called “Christian right,” I would offer my belief that god is change, and it is absurd for a moveable world to imagine it stemming from an unmoving god. Anything static doesn’t begin to acknowledge the power of the process. Both the Bible and the Constitution are road maps. They are not the road.