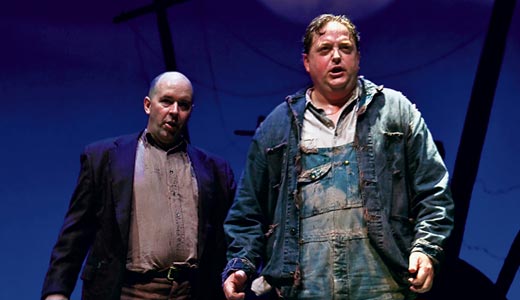 Because the John Steinbeck novel “Of Mice and Men” has been required reading for nearly every American high school student for the past 60 years, and armies of academics have pored over every piece of the piece looking for grand truths, there is no shortage of micro-analysis of the story of George and Lennie — especially the grim life and systematic oppression of migrant farm workers in Depression Era California.

But don’t expect a lot of sociological hypotheses when Kentucky Opera presents Carlisle Floyd’s opera “Of Mice and Men” this weekend at the Brown Theatre.

“I’m not preaching any kind of social sermon,” says Floyd, who debuted his version of Steinbeck’s 1937 classic in 1970, and will be in Louisville for the Kentucky Opera staging this week.

Floyd thinks the sociological aspects are implicit enough in the story that he doesn’t need to beat them to death in the opera. And besides, he says, Steinbeck asked him not to.

“In the first version I wrote, I set it very definitely in the 1930s,” says the composer. “I had a whole chorus about the WPA and the NRA and all those governmental agencies that came to the aid of the poor. But it was the one thing Steinbeck asked me to leave out.”

This was just before Steinbeck’s death in 1968. Floyd, a professor of music at Florida State University, had already hit with a successful opera called “Susannah.” And the movie “Of Mice and Men,” starring Burgess Meredith and Lon Chaney Jr., had demonstrated the book was perfect for dramatization. So Steinbeck was interested when he heard Floyd was working on an operatic version of his story.

Floyd retained the California setting but eliminated any reference to time.

“He didn’t want it pinned to a particular period,” Floyd explains. “I never met him, because he had a heart attack while I was working on the opera. But I did meet his wife Elaine, and we went to the opera opening together. She told me, ‘You have dramatized and included what John thought was important to the story.’ Apparently, with all the sociological commentary the book had generated, Steinbeck felt the attachment between the two men, George and Lennie, and what that said, was the important thing.”

“What Steinbeck is saying, I think, is the companionship that George and Lennie have is infinitely preferable to the absolute solitariness of the other ranch hands, who have made a life out of not attaching themselves to anyone.”

Floyd says his opera has set pieces — arias, duets, etc. — but they are carefully laid within the score by what he calls “orchestral continuity.”

“My objection in musical comedy is I always feel a song coming on,” he laughs. “While the characters are still talking, you can hear the orchestra coming into a song — and I think that breaks the dramatic believability.”

Which is crucial in “Of Mice and Men.”

“The dramatic through-line,” Floyd says, “is a story in which these two men are trying to save enough money to have a place of their own — because one of them is a grown child, who is almost always getting into some sort of trouble that is unintended. And his friend, who is also his keeper, is always trying to avoid that problem until they can get enough money together to buy a place, a home somewhere, and essentially take Lennie out of the social picture. So it is really a suspense story: Can they do it?”

The suspense is imbued with a sense of foreboding. Even when the story is at its most tender, it seems violent trouble may be waiting around the corner. That tone is set from the start as the opera begins with George and Lennie fleeing the police because of something Lennie has done — touching a young woman’s dress because he is fascinated with its color. A simple-minded giant with his hands too close to a girl. Always trouble.

At the end of the scene, safe for the time being, Lennie asks George to tell him the “story” again.

“Someday,” sings George, “we’re gonna get the jack together and we’re going to have a little house and a couple of acres an’ a cow and some pigs an’ …”

“An’ live off the fatta the land,” shouts Lennie. “An’ have rabbits.”

Michael Cavanagh directs the production, which stars Rod Nelman as George and Michael Hendrick as Lennie. Carlisle Floyd will be interviewed by Daniel Gilliam for a podcast that can be downloaded on wuol.org.