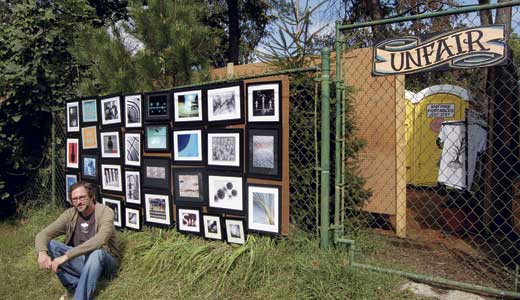 Equipped with a 5,000-degree torch and industrial eye goggles, glassblower Jeremiah Hunt twirls a piece of orange molten glass that will soon be molded into a small turtle. A crowd has gathered to watch the Louisville native, who is sporting a white T-shirt that reads “Turning Trash Into Treasure.”

It is Hunt’s second year selling his colorful glass configurations at the Unfair, which started over a decade ago as an alternative to the nearby St. James Court Art Show, a large-scale annual event in Old Louisville that costs artists a minimum of $450 to enter. The Unfair’s rebel posture and offbeat artwork have made it a local favorite, especially for supporters of the “Keep Louisville Weird” movement and its attendant aesthetic.

But just as the Unfair was kicking off last Friday morning outside the Magnolia Bar, Metro officials shut it down, prohibiting participants from selling their work unless they obtained a special $85 permit, as required by a relatively new city ordinance. Passed unanimously by the Metro Council in May, the city bill was intended to eliminate illegal “squatter” vendors selling art and various goods without a permit outside St. James and other events, sometimes blocking sidewalks and parking lots in the process.

“I understand the ordinance is aimed at peddlers at abandoned gas stations, but honestly that’s not what this is about,” says Hunt, adding some perspective: It’s not like the Unfair artists are selling mattresses on the side of the highway. “This is about local artists who don’t have a chance to display their work. There are no fees. We set up and tear down as a community. We are able to expose people to the local art scene that they may not have known existed …”

The crackdown left many artists despondent, and a handful packed up their wares and went home. The ones who stayed behind were told unless they got a permit, they would only be allowed to display their work without making sales. Police officers watched closely, telling artists if they attempted to sell without a permit, the artwork would be confiscated. Other penalties included a fine of up to $500 per offense and 30 days in jail.

A week before the show, painter Mark Winningham called the Metro Department of Codes and Regulations after hearing about the new ordinance, and he says officials indicated that as long as they were not vending within 100 feet of the St. James festival they would not be in violation of the law. Because the Magnolia Bar is farther than 100 feet, they were not concerned.

But it turns out the ordinance also requires anyone selling goods on any private property — other than the property owner or resident — to obtain an $85 city permit.

“They failed to tell us the rest of it,” says Winningham, one of about 15 artists who ended up buying the permit to sell work at the Unfair.

Paul Harshaw, founder of the Unfair, says the new fee is “a big kick in the butt. I don’t have the money to take on the city, but people need to speak up and let people know that it’s affecting people in a negative way, not a positive way.”

Photographer Mike Gutterman was one of the vendors who sped downtown last Friday and shelled out the cash. He says it was worth it to demonstrate the artists’ resilience.

“We can’t be shut down that easily,” he says. “We’re not going to go without a fight.”

There is already chatter among Unfair organizers about petitioning the Metro Council to amend the law or grant a special waiver to the alternative art show.