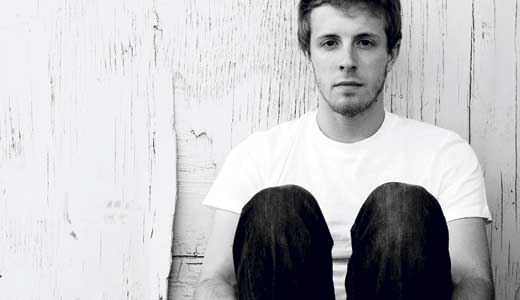 Justin Lewis celebrates the release of his long-awaited album on Oct. 9.

Justin Lewis was raised on a steady diet of vinyl.

“My dad had a huge vinyl collection,” the singer-songwriter says. “I mean, it’s massive, and I pretty much grew up staring at that my entire life.” He counts Louis Armstrong, Neil Young and Tom Waits among his influences.

On Friday, the hometowner will (finally) unveil his debut album Man in Motion at Stevie Ray’s Blues Bar.

Beside melodic voice and sensitive songwriting, you will notice Lewis’s intricate guitar work adorning most of the tracks on the album.

“In high school, all these dudes were sitting around playing Metallica on their electric guitars, and I ended up buying an acoustic,” Lewis recalls. “But I still think that growing up around all those metal dudes brought the guitar out of me.”

The somewhat formidable effect of heavy metal on Lewis does seem to contrast his laid-back album.

“(The album) was done in Hardin, Ky., with a guy named Dustin Spencer,” he says. “We did it in his home studio, out in the middle of the country where he lives. The drive down there helped get me ready for the record, listening to albums on the way and whatnot. But the isolation, for sure, when you walk out of soundproof rooms, go outside, and it’s still quiet. That’s really peaceful.”

Lewis’s songs are thoughtful and deeply personal, but they feel universal. “‘The Thing About Letters’ is probably the most personal song (on the album). It’s a really vague song, too. But every time I play it, I think back on things,” he says. “You also have the more frank songs, like the opener called ‘Kane.’ That one’s definitely blunt and open.”

When it comes to the future, Lewis is still figuring it out. He plans to tour in the late spring, most likely to the East Coast. But as of now, he says, “I enjoy playing Louisville and having a good time. The vibe in this town is just fantastic; I thoroughly enjoy it.”