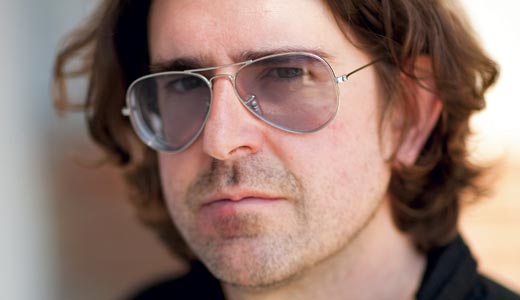 The backing band for Lou Barlow (above), The Missingmen, also back Mike Watt, the venerated bassist from Cali proto-punks The Minutemen and later Firehose.Eric Fermin-Perez

To support his new solo album Goodnight Unknown, Dinosaur Jr. bassist Lou Barlow came up with a novel idea: open for his own band on their fall tour. Backed by Mike Watt’s band the Missingmen, Barlow opens for Dinosaur Jr. Oct. 16 at Headliners (1386 Lexington Road, 584-8088, $25, 8 p.m., doors 7 p.m.). Read our full interview with Barlow at leoweekly.com.

LEO: This touring setup is pretty unorthodox, what with you opening for yourself, in a sense. How did this arrangement come about?

Lou Barlow: I guess it doesn’t really seem that unorthodox to me because I’d done it before; when I had the Folk Implosion together, I had this band alaska! opening for me, and they were my band. Since I’ve started playing again with Dinosaur, (we’ve) been doing a ton of work, and I really thought (this was) the only way I could support my record without being away from home constantly. So I wanted to maximize my time on the road by opening for Dinosaur, and I just kinda forced myself onto the bill.

LEO: You’ve described Goodnight Unknown as falling somewhere between later Folk Implosion and early Sebadoh, which is an interesting comparison. Can you elaborate on that some?

LB: A lot of my early stuff I played on four-string acoustic guitar, like the home recorded stuff, but then also Bubble & Scrape and even into Bakesale. And I did that on this new record. Plus, I added a rhythmic element, and pretty heavily layered recording, which I thought was kinda reminiscent of Folk Implosion. In a lot of ways, I’m just taking all of the ways I’ve recorded and combining them.

LEO: After making Emoh, and then playing with Dinosaur, which is very much at the other end of the sonic spectrum, were you trying to reconcile the two extremes on this record?

LB: Yeah. Or at least, I just wanted to make a more aggressive record, something more reminiscent of my early stuff. Because I think when I go back and listen to the early stuff, that’s still kinda my favorite, so I thought I’d do well to go back and recapture the vibe of some of that.

LEO: What kind of process goes into allocating your songs among your projects? Could songs from Farm have wound up on Goodnight Unknown, and vice versa?

LB: When we did Beyond, it just seemed like the songs I’d written on acoustic guitar didn’t really translate well to Dinosaur, so at that point, I decided that for Dinosaur songs, I was gonna write on bass and just experiment with riffs. On Farm, it was just me playing with Murph and building the songs that way. So as far as delegating songs to each project, that’s not really something that I’ve done.

LEO: When you took requests at your Bloomington show in April, the crowd seemed almost unanimous in requesting “Brand New Love.” Obviously this isn’t “Freebird!”-level, but do you find audiences’ expectations frustrating when you’re touring a new record? Full disclosure: I requested “Perverted World.”

LB: On this tour, I’m gonna stick almost exclusively to the new record, and I don’t have time (laughs) to take requests and chill out with people. If it’s my own show, I like to relax and banter with people and let it take on a life of its own, but that’s not really what this tour is about. And I don’t get frustrated when people wanna hear certain songs over and over again. I’m glad they do. I’m a music fan too, I know how kinda single-minded you can be about your favorite bands (laughs). I don’t get frustrated by it, and when I have the power to, I like to work with it.