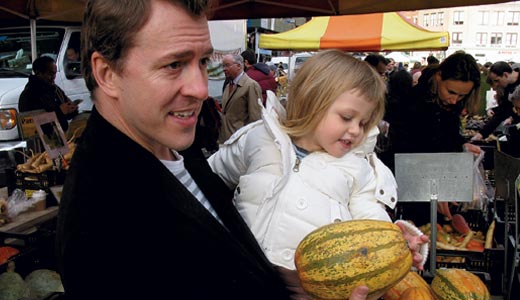 Sometimes it takes one person going to extreme measures to inspire another to take a small step. Case in point: Writer Colin Beavan and his vow to go one year without having an effect on the environment. And as misery often loves company, he tags his wife and toddler daughter to join him on his extreme mission to prove that you can consume without waste and sustain without materialism in New York City.

“No Impact Man” follows Beavan and his family on this journey of no TV, no refrigerator (because there’s no electricity), no toilet paper, no trains, planes or automobiles, not even an elevator ride, no food that isn’t bought in bulk or at a farmers market, no food not from the New York area (goodbye, coffee), no washing machine, no detergent, no shopping for anything new … you get the picture. While Beavan documented the year on his blog (noimpactman.typepad.com/blog), in numerous TV appearances and a book by the same name, the documentary shows the human side of the experiment — the toll it took on wife Michelle, an admitted shopaholic, reality TV junkie and coffee fiend. The best moments in the film are not the extreme measures of deprivation this family endures but rather the day-to-day coping — what to do when the makeshift fridge fails or flies get in the compost box — and the sense of humor they employ against challenge after challenge.

The Beavans were often met with skepticism and were chastised along the way, which the documentary touches on, but they continued with the project, making minor adjustments when Colin deemed it necessary — like taking a train trip to an upstate New York farm, or when Michelle hoped she could “cheat” without him finding out (tipping a Dunkin’ Donuts cashier $10 for filling up her thermos with decaf).

In response to a skeptical New York Times article about the project, which was titled “A Year Without Toilet Paper,” Colin says, “What if we called it ‘The Year I Lost 20 Pounds Without Going to the Gym Once,’ or ‘The Year We Didn’t Watch TV and We Became Better Parents as the Result,’ or if we called it ‘The Year We Ate Locally and Seasonally and It Ended Up Reversing My Wife’s Pre-Diabetic Condition’? There are actual benefits to living environmentally.”

“No Impact Man” isn’t encouraging everyone to give up Starbucks or boycott “Dancing with the Stars.” Rather, it sets out to bring awareness of our society’s penchant for waste, excess and misuse of the environment.