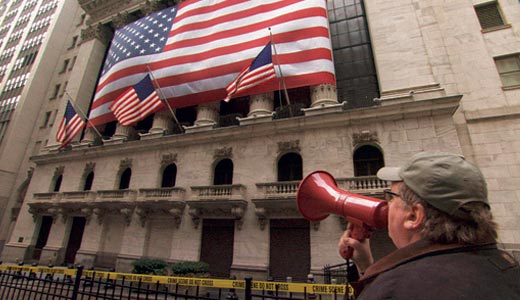 For the past two decades, Michael Moore has been a brilliant propagandist who has delivered poignant documentaries about war, health care, corporate greed and gun violence. His films have made him a liberal icon and wealthy to boot.

“Capitalism: A Love Story,” which takes aim at nothing less than the whole capitalist system, is timely considering the economic woes we’re all facing. Whatever critics will say about the man from Flint, Mich., he knows how to pick a fight and make an argument.

Moore never addresses how we are all compelled to participate in and enjoy the fruits of capitalism’s mayhem and destruction. Even when airline pilots are forced to buy food stamps, it isn’t clear how we’re supposed to stop that travesty. Moore’s frequent-flyer miles do not include a minimum wage for any underpaid pilot.

Never is there a moment when Moore stops to address the paradox that the system he eschews — which threw out thousands of families from their foreclosed homes — has also made him a millionaire filmmaker. That’s because no pure ideology exists in America. Like our so-called Founding Fathers, this country is one big bastard child of free-market and socialist forces mixed together.

While the film is filled with the usual Moorisms that made “Roger & Me” a classic, it lacks the bite of “Fahrenheit 9/11,” the humor of “Bowling for Columbine” and the heart-strings urgency of “Sicko.” When I left the theater after watching those previous films, it was time to protest the war, favor better gun laws and call Rep. John Yarmuth to demand single-payer health care for all. I’ve grown more cynical, but at the end of “Capitalism,” what am I supposed to do? Not shop? Petition the Democratic Party for change? Vote Republican out of spite?

Moore’s voiceover in the end sounds equally deflated, yet he concludes that the answer to bringing an end to this corrupt system of greed is an equally irrational and flawed way to run the world — democracy. Such an unoriginal solution, but it plays to Moore’s core audience, and ticket sales are still the bottom line for a millionaire filmmaker, even if he’s dressed in jeans and a T-shirt.

The two-hour documentary leads us back to a 2,000-year-old system that operates on the notion that the general public knows best. They don’t, despite the carefully marketed campaign commercials that career politicians run every election season. Moore has visited Kentucky, West Virginia, Arkansas and Mississippi — he should know better.

Didn’t we learn anything from satirist George Carlin, a pre-eminent social theorist in his own right who nihilistically quipped about American politics: “This is the best we can do, folks. This is what we have to offer. It’s what our system produces: garbage in, garbage out. If you have selfish, ignorant citizens, you’re going to get selfish, ignorant leaders … So maybe it’s not the politicians who suck. Maybe something else sucks around here … like the public. Yeah, the public sucks. There’s a nice campaign slogan for somebody: ‘The Public Sucks. Fuck Hope.’”