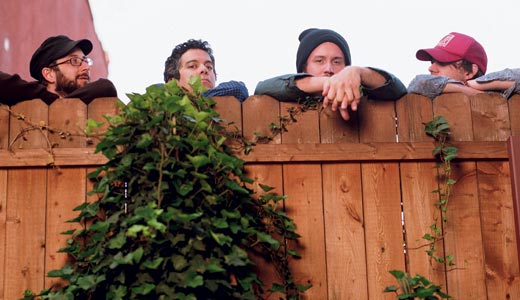 Mike Mogis (from left), M. Ward, Yim Yames and Conor Oberst perform Saturday as Monsters of Folk. One dollar from each ticket will benefit the Food Literacy Project.jennifer tzar

Four years ago, a man by the name of Ivor Chodkowski transformed an 8-acre farm between Oxmoor and I-64 into a curriculum.

Field Day Farm had been a source for fresh organic produce for local markets, but Chodkowski had a bigger plan: to teach kids about where food comes from, what the word “organic” means and how agriculture can peacefully exist in an urban environment. He renamed the program the Food Literacy Project in June 2006.

At its website, foodliteracyproject.org, are quotes from young people who like their veggies (“Gimme some more spinach!”) while, perhaps unknowingly, staying aware of FLP’s cultural impact (“I learned that Oxmoor Farm came before the mall because they needed it more than the mall.”).

This Saturday, one of modern music’s more captivating outfits, Monsters of Folk — My Morning Jacket’s Yim Yames, troubadour M. Ward, Bright Eyes’ Conor Oberst and producer Mike Mogis — show some love for the Food Literacy Project, donating $1 from each ticket to their Halloween performance at the Palace Theatre to FLP.

Costumes are strongly encouraged, as there will be a pre-show costume party that’s free with ticket beginning at 5:30 p.m. at Stage Door Johnny’s (the Palace’s bar). Four winners will receive two backstage passes each and an invite on stage with the band. Costume themes are broad: “scariest, sexiest, most unique or your favorite Monster of Folk.”

LEO: Roger Daltrey’s playing at Horseshoe Casino the same night as Monsters of Folk. Ever heard of him?
Yim Yames: Man I LOVE Led Zeppelin! She’s great! I love that “Purple Haze” one that they do — those gals can ROCK!

LEO: Best anagram of Monsters of Folk: Menfolk Fro Toss. That’s not really a question. Just wanted to point that out.
YY: Brilliant.

LEO: Have you seen Lionel Ritchie at the Commodore Ballroom?
YY: Yes, and the Eagles with Kenny Rogers (when they) were his backing band. They did a 27-minute version of “Stuck On You.” Unreal.

LEO: Currently watching …
YY: My computer screen as I type here to you.

LEO: Have any nicknames developed between the members of MOF?
YY: Yes.

LEO: Do you know any card tricks?
YY: I don’t play games.

LEO: Which would you rather be trapped on: deserted island or pirate ship?
YY: Pirate ship: They have more booty.

LEO: Have you ever solved a Rubik’s Cube?
YY: I don’t waste my time with childish games.

LEO: If you were juggling chainsaws and your nose itched, could you alleviate that itch while maintaining the juggling?
YY: I do it all the time.