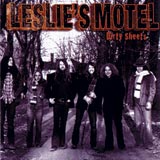 Dirty Sheets marks the eighth installment of Gear Fab Records’ Louisville Music Series. The band features members of The Oxfords and legendary Blues Project drummer Ron Blumenfeld. Recorded in 1970 in Louisville and produced by the Oxfords’ lead guitarist Jay Petach, the heavy influence of the Allman Brothers is apparent, although at no point does the listener get the impression that the band is flat-out emulating. Jam-band guitar noodling meets Southern rock in this unique Louisville hybrid. The psychedelic spirit of The Doors is also conjured on tracks like “Windmills.” While the recording equipment would now be considered primitive in the age of pitch correction and Pro Tools, the album has a highly professional sound.