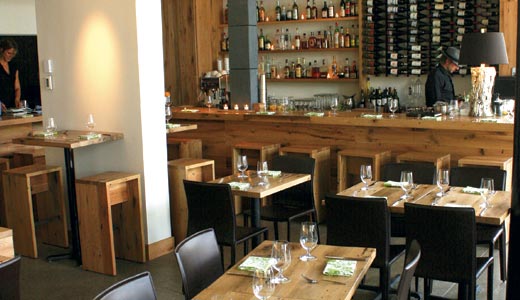 Rough economic times hit Louisville’s dining economy even before officials got around to telling us we were in a recession.

Before the reality of shrinking 401(k) plans hit home, when gasoline prices spiked past $4 a gallon last year, restaurateurs in the city noticed a sharp drop in consumers joyriding their SUVs in from the suburbs to dine.

In similar fashion, new suburban eateries opening on the cusp of the decline found business falling well below projections. Seviche’s second property on Goose Creek Road, hailed with excitement upon its arrival, fell short of critical mass and failed in less than a year.

Corbett’s “An American Place,” Dean Corbett’s beautiful restoration of a historic farmhouse in front of Costco, arguably one of the city’s top restaurants, is hanging on, partly by a mix of sheer grit and high quality, and partly, perhaps, from stellar publicity that went national.

Even after gas prices receded, continued economic distress and rising unemployment have cast a shadow over the local restaurant economy for more than a year now, and it’s hard to find a restaurateur optimistic enough to claim to see illumination at the far end of the tunnel.

“It’s not over,” Corbett says of the recession. “We’re still largely in the same boat. We’re leaner. We had to get payroll and costs under control, fortunately without having to do layoffs. We’re doing the best we can with what we get, and some weekends it’s great. With good weather, it’s jamming, but get a rainy weekend when we can’t use the porch or the patio, it’s not so good.”

Perhaps the best news is that the economy has forced closure for only a few of the city’s top independent restaurants; frankly, many of the shuttered eateries can’t honestly attribute blame to the economy alone.

The East Main and Market arts district can hardly be dismissed as a dead zone for restaurants, though, when such hot spots as Mayan Café, Toast on Market, Cake Flour, 732 Social, Wiltshire on Market and White Oak continue, and Browning’s is open again. There’ve been few failures on the Bardstown Road and Frankfort Avenue restaurant rows and environs, excepting the recent demise of Café Metro, which appeared to have as much to do with age as economics.

How have the survivors coped? Strategies vary, but a few common elements appear.

At Le Relais, coincident with the departure of Chef Daniel Stage, proprietor Anthony Dike tweaked the upscale French menu to add more affordable bistro-style dishes. Who’s going to object to steak frites? At Equus, Corbett first tried reducing prices by coming up with quality entrees that could be priced at lower cost. Then, hoping to increase efficiency by combining kitchens while satisfying wallet-nervous customers with reduced prices, he tried offering a single menu for both Equus and its less pricey next-door sibling, Jack’s Lounge.

Avalon added a broader selection of “small plates” available as light entrees or in combination for a larger meal ideal for sharing. This approach has worked well in many more affordable spots, ranging from traditional Spanish tapas at De La Torre’s and the hugely popular Mojito to international-style tapas at North End Café and Japanese small plates at Maido. New arrivals 732 Social and Z’s Fusion, sensing the economic climate, led their menus with small plates and enjoyed instant acclaim.

Other changes sought to lure business with weekly specials on wine (half-price “wine down” evenings are now commonplace, and crowds follow), and on food. Seviche on Bardstown Road celebrates “Seviche Sundays” with half-price food and wine, with remarkable response: Sundays at Seviche now rival Fridays and Saturdays as busiest evenings of the week.

More than a few new eateries — some ethnic, others down-home — seek to address recession fears with low-price, simple fare. Hamburger joints (Bunz on Baxter, the venerable but newly sanitized Burger Boy in Old Louisville and Five Guys and Home Run Burgers in the ’burbs) and hot-dog stands (Lonnie’s, Conez and Coneyz and more) are popping up all over, as are budget-priced Mexican, Persian and Asian spots, capped last week with the opening of Potstickers on Baxter, a quick-service Asian eatery owned by Edward Lee, whose other shop, 610 Magnolia, continues to thrive as one of the city’s priciest and most innovative eateries.

Over at Equus, Corbett discovered to his surprise that his decision to consolidate the menu with the upscale bar fare at Jack’s proved unpopular.

“We had tons of requests to go back to the way it was,” Corbett says. “People got a little upset. They told me, ‘We came here for an elegant meal. We loved that.’ Overwhelmingly, people said they come here for a special occasion and wanted the old menu back.

“I don’t know if this is a reflection of the economy loosening up or just the natural order of things, but we’ve listened to our customers, and people are happy. Give ’em what they want, that’s what keeps us strong.”