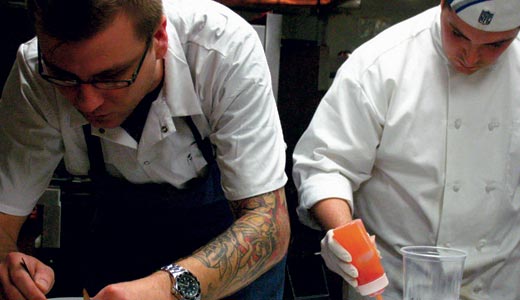 The term “speakeasy” brings to mind visions of a Prohibition-era bartender, complete with black elastic armbands and a luxurious mustache, advising patrons of an establishment that was — illegally — peddling booze to be quiet, to “speak easy.” But what’s a “Supper Speakeasy”?

A fledgling events company in Louisville, Bon Vivant Savant (bonvivantsavant.com), has caught fire with local foodies by providing a modern-day culinary version of the old-fashioned speakeasy. Roughly once a month, BVS arranges a dinner party catered by a restaurant chef. The parties range from 25-40 seats, depending on space constraints, and 15 percent of profits go to local charities like Gilda’s Club.

The $75 price includes food and wine or cocktails, although the cost can be adjusted for teetotalers. Locations (never a restaurant) are varied and sometimes unusual, such as a farm, a rooftop, a warehouse or the Rauch Planetarium. The name of the chef and the menu are publicized, but the exact location remains undisclosed until 48 hours before the event. At that time, participants with advance reservations receive an e-mail with directions to the site, along with a password they must use to be admitted to the venue — where they are purposely seated with strangers. October’s dinner, held last week, was in Prospect at the home of Maker’s Mark Distillery President Bill Samuels.

It’s all very Roaring Twenties, with a twist of 007.

BVS founder Jo Self hasn’t always been a guerrilla event planner. In 2008, when the Louisville native started the food-focused events company, she was coming off a five-year stint at Yum! Brands’ corporate headquarters in Louisville. And though her work at Yum! garnered national awards and landed her a seat on the board of directors of the Employee Service Managers Association, she was hungry for more.

Traveling extensively in Latin America and Europe, Self found the underground dining trend that was sweeping those continents fascinating. In the era of social networking, when so much stranger-to-stranger communication happens via computer, she was delighted by the idea of bringing like-minded but disparate groups of people together in secret locations to enjoy the labors of passionate gourmet cooks and restaurant chefs.

“The Supper Speakeasies are my flagship event and have grown in the most lovely way … the interest and distance of where some people have found me is still a bit amazing to me,” she says. “Thank goodness for the Internet. I’ve had guests call about and attend my events from San Francisco, New York and Cincinnati. As the Speakeasies have grown in popularity, I’m actually at a point where I can offer these on a private basis as well.”

Self’s enthusiasm appears to be contagious among local chefs, who volunteer their time, though BVS reimburses them for the cost of their edible supplies.

“In the past, I’ve sought out chefs to work with, but I’ve recently been lucky enough to have chefs come to me,” Self says. “I think some of the fun for chefs — and wannabe chefs — is that they get a chance to do something they love and work with no creative restraints. Of course, the challenge is in how to accomplish the dinner, often with limited resources (i.e. no kitchen).”

Stephen Dennison — passionate foodie, bartender and chef who has worked at such Louisville fine-dining powerhouses as Limestone, Varanese and Z’s Fusion downtown — was the chef selected for October’s event. “Although Jo’s company is just over a year old, she is really beginning to gain traction and develop a reputation as a forward-thinking, resourceful and dependable event planner,” he says.

Dennison, who was interviewed before last week’s dinner, describes the event (billed as “A King Louis Dinner”) thusly: “An eight-course, five-cocktail affair reminiscent of the famous Ancien Régime feasts of French royalty. A meal of royalty from the house of Bourbon or a meal with royalty from a bourbon house — either way you look at it, this is a very exciting evening she has planned.”

Ethan Ray, pastry chef of the Seelbach’s Oakroom, collaborated with now-wife Sarah (née McGregor, chef tournant of the Oakroom) on a Supper Speakeasy in March. Speakeasy dinners are often anything-goes creative culinary romps, and the Rays’ menu was no exception. Diners were treated to a salad featuring golden beet and olive powder, a meat course of pork belly and “mustard butterscotch,” a fruit course of a candied apple encased in lime, rosemary apple cider and pop rocks, and an after dinner “ment” of white and dark chocolates, menthol and wasabi.

Ethan waxes rhapsodic about the underground dining trend in general.

“For the dining public, I think underground dinners are a new way for them to approach dining,” he says. “There’s a certain air of mystery to it. It makes the entire process exciting again, and almost forces people to throw caution to the wind and just focus on what the food and experience of dining is all about.”