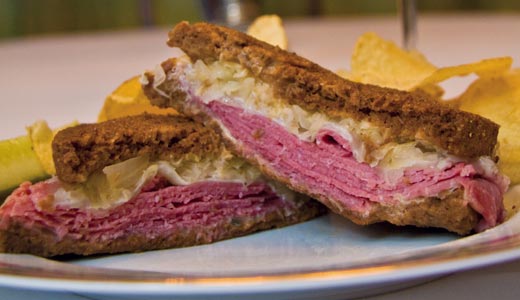 It’s just after noon, and the daily lunchtime crowd is bum-rushing the staff of Morris’ Deli & Catering. Employees in aprons slice fantastically sized hunks of smoked meat into thin sheets behind the cramped counter, stopping only to take the order of a new customer or to assemble, with the precision and care of a Kanto Nigiri sushi chef, the finished product: a sandwich, which they hand-deliver to the salivating patron.

I step into the line, where in front of me a short woman in a royal blue sweater is delivering complicated instructions (alternating cheeses, and in variable amounts, et al.) to the sandwich crew. All of it is dutifully recorded and set into motion.

After eyeing me for a moment, this woman, Amanda, asks, “What’re you getting?”

“A Reuben. I hear they’ve got the best in town.”

Amanda is stunned. “I didn’t know they had Reubens.” She turns to Matt, a Morris’ employee who’s busy writing down her instructions, and says after a moment of deep thought, “I think I’d like to change my order.”

As a former employee of the Subway sandwich empire, I am familiar with Matt & Co.’s response — a collective roll of the eyes, sighed laughter. But what differentiates Morris’ from, say, the Schlotzskys and Penn Stations of our fast-food culinary culture is that this business has been dutifully recording labyrinthine sandwich instructions for close to 60 years, and that its employees tend to do so with a smile and sense of community.

Nestled on Taylorsville Road just off its fork with Bardstown Road and Trevilian Way, Morris’ has operated under various names throughout the years: Victory Food Market in the ’50s and ’60s; Karem Deeb’s in the ’70s and ’80s*. In 1987, the now-eponymous owner bought it and expanded the food and liquor options. In a neighborhood that has changed dramatically with the times, Morris’ has stayed largely the same, offering the kind of mom-and-pop deli that is becoming a rarity in Louisville.

“It’s a very simple thing we do here,” says manager Joe Brockin, who’s been with Morris’ since 1989. “We haven’t changed the original idea very much. We offer quality food for a fair price. It costs us a little more, and it’s harder to compete, sure, with these commercial sandwich places, but we know we have the best quality food. And our customers are worth it.”

Brockin then points to a gentleman standing in line next to me and says, “Except for this guy.”

The guy laughs. “Yeah Joe, I been comin’ here so long I put your kids through school, haven’t I?”

Then I get to the point.

“Truth be told, I don’t even like corned beef,” he tells me when I ask him about the Reubens.

Technically, the sandwich isn’t on their menu, even though their build-it-yourself approach allows for any combination imaginable. “But,” Brockin continues, “I hear it’s pretty good.”

For the uninitiated, here’s one succinct history of the Reuben sandwich (aka Corned Beef’s Finest Hour) courtesy of “The New York Times Food Encyclopedia”: The founder of the landmark Reuben’s Restaurant & Delicatessen, Arnold Reuben, was merely trying to satisfy the whims of a movie star, yet he stumbled — like Salk, Pasteur and the lady who accidentally invented the Snickers bar before him — into greatness.

The year was 1914. Late one evening a leading lady of actor Charlie Chaplin came into the restaurant and said, “Reuben, make me a sandwich, make it a combination, I’m so hungry I could eat a brick.” He took a loaf of rye bread, cut two slices on the bias and stacked one piece with sliced Virginia ham, roast turkey and imported Swiss cheese. He topped it off with coleslaw and lots of Reuben’s special Russian dressing, and added the second slice of bread.

He served it to the lady, who said, “Gee, Reuben, this is the best sandwich I ever ate, you ought to call it an Annette Seelos Special.”

To which he replied: “Like hell I will. I’ll call it a Reuben’s Special.”

Although the modern-day Reuben eschews any meats other than corned beef, it remains largely unchanged from its original incarnation and is crafted by Morris’ squad along these specifications, save their substitution of crisp, light rye for dark.

Yet like all histories, food’s is subject to the same kind of fragmented interpretations usually attributed to the search for holy relics, the pursuit of the lost continent of Atlantis, or other forays into nebulous historical territories. Conflicting accounts, bragging rights and the mythologizing effect of time make discerning the Reuben’s origins difficult, if not outright impossible.

A second story posits that Reuben Kulakofsky, a grocer and Russian transplant to Omaha, Neb., invented it at the behest of a poker buddy who owned a hotel, and whose restaurant claims to have put the sandwich on its menu for the first time in recorded history. Another also suggests the Reuben has Nebraskan origins: In 1956 Fern Schnider, a chef at the Rose Bowl Restaurant in Omaha, submitted a recipe for “a hearty man-sized sandwich of corned beef, sauerkraut and Swiss cheese on Russian rye bread” to a contest sponsored by the National Restaurant Association — and won.

Regardless of whence it came, a good Reuben is hard to find in Louisville. Before I discovered Morris’, my search for Louisville’s best version of this iconic American delicacy took me to all manner of places. Some were decent, a few noteworthy, but the vast majority were disappointing, to say the least.

While the offending establishments’ names will be withheld, the myriad forms a Reuben can take within city limits almost borders on sacrilege, chief among them the practice of serving one open-faced, rendering it into a soggy casserole unfit for swine. More often than not, the grilled corned beef would be rubberized, and the amount of cheese smothering these oversized sadness-meals reminded me of another iconic American delicacy: grease.

Think of a sandwich as a kind of clock you can eat: All of the pieces work in tandem with the others, and so no one element is more important (or more delicious) than any other. This is essential to the Reuben. The ratio of meat to bread is tantamount; otherwise it’s like trying to wrap your jaw around one of those Arby’s jumbo roast beef sandwiches, and all you feel is your jaw going numb from the labor of chewing. The Reuben, then, is about harmony: the way the “bite” of the Swiss runs counter to the tangy dressing, accentuated in this delicate balance by the sauerkraut, which exists in roughly equal proportion to the meat, which should be as tender and thinly shaved as possible. Thusly, the resulting texture should be moist, not soggy, and crisp, not crunchy. It is ballet in your mouth.

So far, it looked like our Southern tendency to super-size our food — with more calories, more meat, more fluid ounces in our sodas, more protein — would end my search for Reubenic greatness in a pile of inedible slop or a trip to the ICU.

Back at Morris’, Des Ahern has just finished a turkey sandwich on whole wheat.

“Ninety-eight percent of the time, this is what I get,” he says. “It’s a great place: quality of the food, the ambience, it’s just right.”

Ahern has been coming here for decades, and says that if you added or subtracted just one chair, or did anything to slightly alter its current state, it wouldn’t be the same. “It’s calibrated perfectly, and it’s cheap, too.”

Another customer, Andrea Smuskiewicz, agrees. “I come here a lot,” she says. “It’s not very expensive, you don’t have to pay right away, so you can relax here, take your time. It’s just old-fashioned that way.”

Wandering back to the counter, I chat with Gale Brockman, an 18-year employee who’s busy applying a Goldilocks-sized layer of Russian dressing onto a slice of rye.

“Things change,” she says. “We’ve seen the gas station go, doctor’s offices. There’s a Subway just down the street. But in here, you’re family. Of all the places that have come and gone, we’re still standing.”

Within minutes, Brockman wraps the sandwich in tinfoil, hands it to me, and the moment of truth arrives. Out in my car, with a McDonald’s to my back, I unwrap the still-warm foil, basking in the sweet aroma of pickled cabbage, and take a bite.

Louisville, we have a winner.

*Whose sign remains towering above the property, causing a modicum of confusion for newbies.