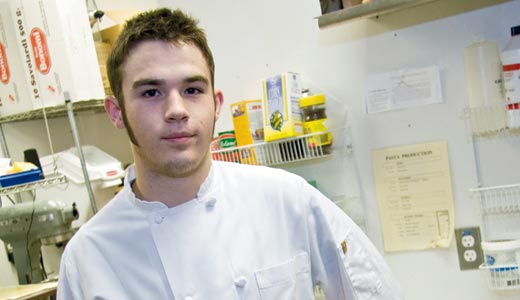 While most high schoolers his age anxiously prepare for Friday night’s football game — what to wear, who to go with, how to extend curfew — Waggener senior Joel Poole stands in Volare’s frenzied kitchen, wearing a long-sleeved, button-down chef’s smock and black pants, wrestling with the cake part of a chocolate truffle tort. Joel is the assistant pastry chef, a job he’s ascended to since starting with dishwasher duty two years ago. Under the watchful eye of mentor and boss Joshua Moore, Volare’s executive chef, Joel turns the pan clockwise and gently beats the sides, demanding it release the spongy cake. Another few minutes over the fire, another few pats, and soon the pan gives up its contents. “That guy didn’t want to come out,” he says and wipes his brow.

“I noticed it when he was about 3,” recalls Lisa Poole, Joel’s mother. “Joel didn’t want to watch the typical kid shows like ‘Barney’ or ‘Sesame Street’ — he wanted to watch the cooking shows on PBS. He actually asked for cooking-show videos for his birthday. This was before Food Network even came out.”

Lisa followed her own passion for Southern-style cooking by hanging out in her grandmother’s kitchen and learning the ins and outs. After a short stint in catering, she now runs the kitchen at R Place Pub in Lyndon. Joel credits his mom’s creative cooking style and his family’s involvement in the meal-making process for his early interest in food.

“I’ve never been the mom who just made hot dogs and mac ’n’ cheese,” Lisa says. “We’ve always cooked real meals. No matter what I made, I’d always make the kids (Joel and his two brothers, Corey and Luke) try it. I’d tell them, ‘Take one bite. It won’t kill you. If you really don’t like it, you don’t have to eat anymore. But you might decide it’s one of your favorite things.’ I kinda shot myself in the foot on that one as far as Joel was concerned — he liked everything.”

Joel works at Volare through Waggener’s co-op program, set up through his culinary arts class. He’s required to work 10 hours a week, which includes most Friday and Saturday nights, the busiest in the restaurant industry. For a kid in high school, those two evenings are major. But Joel says he feels content in the kitchen. “To be honest, I’m not big on the high school social scene anyway. My friends are in the kitchen — my weekends are with them,” he says. “Unlike most kids, when Friday comes, I have to go to work, but I’m actually excited about it. School is my work, and Volare is my time, doing what I want to do.”

“The fact that he would be missing a lot of extracurricular activities was a huge part of discussion before he even went into Waggener’s Culinary Arts Department,” admits Lisa. “Chef Josh has been great about giving him time off for school activities. He has a strong home family and a great extended family at Volare.”

And “Chef Josh” Moore, who sees a lot of himself in Joel, agrees. “I personally have no regret putting my career and future above playing sports and partying with friends,” he says.

In fact, Joel’s career path mirrors Moore’s own experience in the Louisville dining scene. He began assisting the pastry chef in Vincenzo’s kitchen at 14. By 16, he was pastry chef at Wildwood Country Club; one year later, he was the executive sous chef and pastry chef at Porcini. Now 30, Moore has been at Volare for five years. He says he sees a lot of the same passion and thirst for culinary knowledge that he had at Joel’s age, a compliment Joel hears a lot.

“Everybody I meet who has known him since the beginning says that I remind them of Josh at this age — young, smart and cocky as can be,” Joel says. “He’s like an older brother, and he’s always looking out for me. He’s got this saying: ‘School, work, girls — in that order.’ When he was in high school, he was just like me — he didn’t care about school. He graduated and everything … barely. So he knows what it’s like, so that’s why he’s so adamant about the school stuff. In a way, I’m more afraid of him than my parents.”

Joel has his sights set on a Louisville culinary college, he’s just unsure at the moment as to which one. Sullivan University is the top choice in the area, of course, with its longstanding reputation as a top culinary arts college. However, Jefferson Community & Technical College also offers a culinary arts degree at a much lower tuition. By winning several state cooking competitions, Joel has roughly $10,000 worth of scholarship money tucked away — but that’s a dent in the overall tuition needed for either school.

“The Sullivan thing would be nice — it’s a great name and all that, but it’s a lot more money,” Joel says. “In this profession, it’s not about the big name — it’s based on what you do. If you’re a lawyer, anybody can write a paper, and two guys are going to write the same exact thing on that paper. How do you pick? In cooking, you can actually see what somebody does.”

At the moment, with eight months before he graduates, Joel doesn’t seem too concerned about his eventual decision. “I’m a procrastinator,” he says. “I’ll see when senior year is over.”

Hands-on learning is certainly the best way for a chef to hone his craft. Joel is fully aware his time in the kitchen is worth more than what any textbook could provide. “To be honest, I’ve learned more at Volare than in any class — and not just about the food, but about the business,” he says. “You can never know it all — you’re always going to learn something new. If you think you’re done learning, well, then you’re just done cooking. Cooking is learning; it’s just the way it is.”

With aspirations to open his own restaurant among Louisville’s elite, Joel is happy now apprenticing under his mentor Moore and staying behind the scenes of a bustling Frankfort Avenue restaurant. Every so often, however, he likes to sneak to the front and watch people enjoying his creations. “When I’m at work and get a chance to walk up to the frontline and see the dining room, with all these happy people — they don’t know me, they don’t know who I am — it doesn’t matter … they’re out there enjoying it and having a good time — you’ve done your job. It’s more than just cooking.”

It’s also more than just food that first hooked Joel as a child.

“Cooking always been fun to me because I get to make something — build stuff,” Joel says. “As you grow up, you see the world is a bigger place — it’s bigger than just your front yard. The more you get interested in something, the more you research. And I’ve come to realize why I love it so much. Of all the different cultures, races and religions in the world — we don’t get along at all. For whatever reason, we don’t get along. We have nothing in common except for one thing — food. We all gotta eat. The one thing that will bring everybody together is food.”

After a brief conversation with Joel, it’s easy to forget he’s only 17. His careerist mindset certainly outstrips any teenage mischief lurking beneath. But it’s there. And that’s a good thing. After pontificating on why he loves being a chef, Joel slyly grins and says: “And come on, girls love chefs."