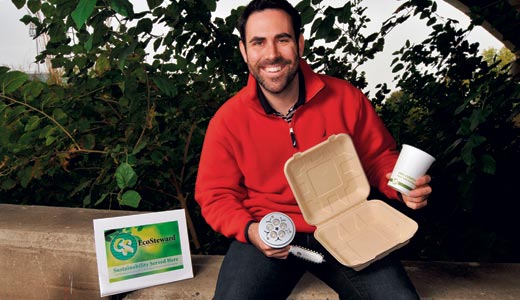 Michael Drane of EcoStewardPhoto by Garrick Fields
“‘Eating is an agricultural act,’ as Wendell Berry famously said. It is also an ecological act, and a political act, too. Though much has been done to obscure this simple fact, how and what we eat determines to a great extent the use we make of the world — and what is to become of it. To eat with a fuller consciousness of all that is at stake might sound like a burden, but in practice few things in life can afford quite as much satisfaction.” —Michael Pollan, “The Omnivore’s Dilemma”

Ten years ago, at least in Louisville, it would have been unheard of to know the name of the farmer whose cows furnished your steak. The idea of planting a rooftop garden on a hotel would have seemed too lofty. And taking your food home in a container that you could throw into a compost heap in your garden would have drawn puzzled stares.

Now, all of this happens here on a daily basis.

There’s no question people are, in growing numbers, rethinking the way they eat. How could they not when documentaries and bestselling books by authors like Michael Pollan and Barbara Kingsolver keep the topic at constant attention. The green and locavore movements further connect ideas of eating to sustainability and the environment. This seems to prompt a desire for return, as in a return to local food sources and a return on investment, environmentally and socially.

The most obvious manifestation shows up on restaurant menus; it’s the meal that gets us in the door.

Grass-fed Kentucky bison burger? Yes, please, and medium-rare. Sheltowee Farm mushroom ravioli? Absolutely. An omelet made with local, farm-fresh, free range, organic eggs? Why not. We seem to be getting used to the strings of adjectives that might precede menu items these days. We can probably get used to digesting that, too.

“It’s all about the food,” says Anne Shadle, co-owner and general manager of Mayan Café, which uses many products from local farms. This summer, Mayan Café tried a concept called Mayan Mondays: Each week, chef Bruce Ucan showcased a local farmer’s food. The result was a boom in business.

“Every Monday our sales doubled from the previous Monday,” Shadle says. “We’ve gotten better at letting people know the food is local and fresh.”

One notable local dining trend is bison. Slowly but surely, the Kentucky Bison Co., owned by Steve Wilson and Laura Lee Brown (of 21c Museum Hotel renown), has worked its way onto menus across the city. Bison is so pervasive it’s starting to seem typical: Close to 60 restaurants and more than 20 specialty stores in the region feature bison from the Kentucky Bison Co., which is headquartered on Woodland Farm in Goshen.

Bea Chamberlain, owner of El Mundo on Frankfort, has eliminated beef from the restaurant’s menu in deference to the healthier, leaner, more sustainable and environmentally friendly Kentucky bison.

“People have been crazy about it,” Chamberlain says.

It doesn’t hurt that the Kentucky Department of Agriculture offers restaurants that use Kentucky-grown products a rebate of up to 20 percent on their spending (not to exceed $12,000 a year), if restaurants agree to promote the products in their advertising. The program, called Restaurant Rewards, includes more than 50 restaurants, most of which are in Louisville and Lexington. The money for the program comes from the federal tobacco settlement; although there was a temporary gap in funding earlier this year, a spokesman for the department says cash is again flowing.

Of course, there is the price of going green. Restaurants are spending more money for quality meats and produce, sometimes eight times as much for certain items, and yes, those prices sometimes get passed on to the customer. Many would argue it’s worth it.

Claude Stephens, education director at Bernheim Arboretum and co-founder of Generation 14, a green consulting service, explains his dining preferences this way: “When I sit down to a meal, I like to ask,  ‘Can you recommend a dish that uses the most local foods?’ Servers usually respond, ‘Hmm… ,’ and you can see them going over the menu in their mind. What I want to hear is, ‘Glad you asked, we do have a dish that’s all local.’”

But what happens after you’ve enjoyed your free-range, antibiotic-free chicken and you still have half the dish left? If you’re lucky, it gets transported home with you in an environmentally responsible container.

Michael Drane’s company EcoSteward began as a green product distributor and has since partnered with Creation Gardens to reach a larger restaurant population. Drane offers restaurants free consultations on sustainability and has become a go-to guy for biodegradable and compostable containers. His philosophy is to “choose a container for the worst-case scenario.” The worst case, in terms of the environment, is that the container is thrown away. Most of our parents’ or grandparents’ trash is still in its final resting place, after all.

Enter businesses like EcoSteward and Claude Stephens’s Generation 14. Both are interested in the holistic approach, and stress the importance of increasing sustainability on all levels. Shadle, of the Mayan Café, says she has now, with the help of EcoSteward, incorporated green cleaning products, paper supplies and containers; her plan also includes larger goals like lighting and solar energy.

Stephens says it’s important to have metrics to judge usage and create goals. And there are some establishments, especially those with owners or landlords committed to similar goals — like 732 Social and Proof on Main — that have green counsels committed to constantly evaluating how to increase sustainability.

The EcoSteward decal now seen on many restaurant windows is a sort of green beacon.

“The criteria for receiving a decal is commitment and passion to see that sustainability is at the core of your business,” Drane says. “It is not meant to be a certification, but a steppingstone toward other recognition.”

That could be anything from a LEED-certified business (the foremost indicator of “green-ness”) to a member of the Green Restaurant Association. As education and marketing amplify, awareness and demand also tend to increase.

There are roadblocks to running a sustainable restaurant, and not just in cost or manpower. One issue is commercial recycling for businesses: It’s scarce. In the last year, Louisville Originals, the local restaurant group, met with officials from Metro Solid Waste Management to discuss a pilot program wherein the city would provide recycling for the major restaurant corridors, such as Bardstown Road. But then nature said no, in the form of a hurricane-related windstorm, ice storm and flood.

“Between the natural disasters and the subsequent budget cuts, it just had to be put on the backburner,” says Phil Miller, a spokesman for Mayor Jerry Abramson. Miller adds that the city is still interested in the concept.

Unfortunately, some restaurant owners are left to tackle their enormous garbage on their own. It’s not impossible, but it is an inconvenience. Bea Chamberlain, owner of El Mundo, handles her restaurant’s recycling, which requires meticulous sorting and disposal of the packaging.

“I did it myself for seven years; I was hauling it like three times a week,” she says. When that became tiresome she put an ad on Craiglist; now she pays a couple to transport the glasses, bottles and aluminum to a recycling location. She’s still hoping the city will follow through with a recycling plan, and it’s no secret it would be easier with governmental help. As Stephens explains, “Businesses shouldn’t have to pay a premium for responsible actions.”

While it’s commendable that restaurants are leading the way, sustainability requires that everyone, from city government to patron, share the responsibility.

“If we expect the restaurants to do all the work for us, then we’re being lazy,” Stephens says. “When ownership transfers, responsibility transfers.”

Some things you can do: Dispose of takeout containers properly (if it’s biodegradable, compost it; if it’s recyclable, recycle it), order responsibly (look for local; don’t be wasteful), and consider decreasing your carbon footprint even further by walking or biking to dinner. Also, how about a reusable coffee cup for your morning drink? Or maybe bring your own containers for leftovers.

Buzzwords like organic, green and sustainable are often conversational terms, but behind the vague understanding of their true meaning is, at minimum, a yearning to try things differently.

“The community holds a lot of faith that these things can happen. We have confidence that things can be better,” says Johnny Green, a bartender at Proof on Main and foodie.

Plenty of chefs and restaurateurs buy the food they cook for you at local farms and farmers markets. The first rooftop garden opened on a Metro government building this year. Questions that 10 years ago seemed remote now have answers that surround and encompass.

“The more questions asked, the more demand is increased,” Stephens says. “Just asking the question doesn’t commit you to anything but education.”