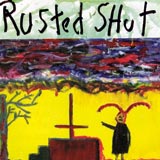 You’d be excused for wondering whether the Houston-based Rusted Shut were much of a band, considering over the course of what couldn’t even arguably be called a “career” beginning way back in 1986, they’ve only released a small handful of titles. That is, before this year’s release Dead on Load, Rusted Shut had only released one LP, one CD (compiling the LP and some extra tracks) and one 12” EP (last year’s excellent Hot Sex on Dull Knife). And as true, punk-rock lifers, Rusted Shut apparently could not care less for such niceties as melodies or high production values. While their sludge-and-scream aesthetic may be off-putting to most, courageous listeners who like Flipper, Chrome or Brainbombs should revel that Rusted Shut aren’t quite dead just yet.