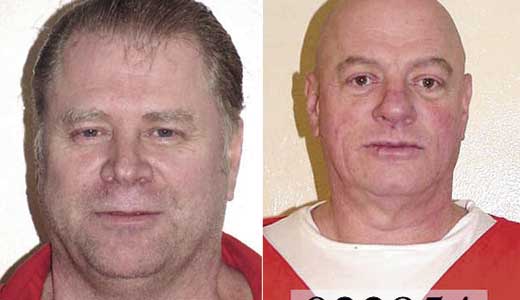 Courtesy of Department of Corrections

First a Valium is administered to relieve anxiety, and presumably to ensure the impending procedure goes smoothly.

Prison guards then lead the sedated inmate into the execution chamber where he is strapped to a gurney. Once an IV is in place, a series of three drugs is pumped through the line: The first is a short-acting anesthetic. The second is a neuromuscular blocker that causes complete paralysis. The third stops the heart.

It is a procedure that attorneys for condemned inmate Gregory Wilson argue is unconstitutional, possibly resulting in their client being “tortured to death.” Specifically, they claim Valium has the potential to interfere with anesthesia, meaning a prisoner might regain consciousness during the execution, yet be unable to communicate any pain as the heart-stopping chemical courses through his veins. Even without the Valium, they argue the lethal cocktail could result in excruciating pain if the anesthetic does not work, a concern that’s compounded by the fact that the executioners administering the drugs are not medical professionals.

Meanwhile, lawyers for the state argue that because the U.S. Supreme Court has already determined Kentucky’s lethal injection method is constitutional, Wilson does not have a case. Besides, even if he did have a potentially valid claim, they argue a one-year statute of limitations bars Wilson — who has been on death row for kidnapping, rape and murder since 1988 — from challenging lethal injection, the state’s primary method of execution since 1998.

Last week, U.S. District Court Judge Karen Caldwell agreed with the state on the latter point, denying Wilson’s challenge because she believes it was brought too late; she did not weigh in on his other claims.

Louisville Public Defender Dan Goyette, the lead lawyer representing Wilson, plans to meet with his client this weekend. “Under the circumstances, I think it’s advisable at this point to proceed with an appeal,” he says.

Assuming Wilson appeals as expected, his case will remain one of four lethal injection challenges currently pending in Kentucky and one of dozens across the United States. In fact, although the Supreme Court upheld the nation’s prevailing method of execution last spring, lethal injection challenges have not subsided, and some observers expect they will continue in full force.

“There is still a large amount of lethal injection litigation going on across the country,” says David Barron, a capital post-conviction attorney with the Kentucky Department of Public Advocacy. “I do not see that it has slowed down by any means, and I don’t envision it will.”

In April of 2008, the nation’s high court denied the claim of Kentucky inmates Ralph Baze and Thomas Bowling, who argued the commonwealth’s three-drug lethal injection protocol violates the Eighth Amendment.

Although the Supreme Court decided in a 7-2 ruling that Kentucky’s lethal injection procedure — similar to the method used in all 38 states that impose capital punishment — does not amount to cruel and unusual punishment, the justices disagreed on many points and raised numerous concerns in separate opinions. For example, Justice John Paul Stevens sided with the majority in determining Baze and Bowling did not make a strong enough claim, but in a separate opinion he questioned the use of a paralytic agent in lethal injections, and called for the death penalty to be abolished altogether.

Since then, however, 75 inmates have been put to death by lethal injection across the United States, including one — Marco Allen Chapman — in Kentucky. That number was slated to reach 76 last month, but the execution of Ohio prisoner Romell Broom was halted after prison nurses spent two hours unsuccessfully trying to insert an IV line. Media accounts say Broom lay strapped to a gurney while being stuck with a needle 18 times. At one point, he reportedly tried to assist the execution team in finding a vein. Finally, the governor postponed the execution, which is now on hold pending the outcome of a Nov. 30 hearing in federal court.

Ohio corrections officials intended to execute another prisoner this week, but a federal appeals court intervened on Monday and granted a stay: “Given the important constitutional and humanitarian issues at stake in all death penalty cases,” the ruling states, “these problems in the Ohio lethal injection protocol are certainly worthy of meaningful consideration.”

The botched execution will undoubtedly affect future challenges, and could ultimately be reviewed by the Supreme Court, according to Barron, who is handling three of the four lethal injection cases in Kentucky, and who argued before the high court on behalf of Baze and Bowling.

“There is no reason to believe this will not happen again,” says Barron. “I realize the purpose of an execution is to cause death, but it is necessary to do it in the least painful manner possible.”

The idea to begin executing prisoners by lethal injection in the United States was concocted in Oklahoma in 1977. In response to public outcry about the brutality of electrocution, Dr. Jay Chapman, Oklahoma’s medical examiner at the time, came up with the three-chemical method — despite having little-to-no experience in the field of pharmacology — and it has endured.

For years lethal injection appeared relatively humane, especially when compared to electrocution, a form of execution during which inmates violently convulsed, sometimes smoldered, and occasionally caught fire. At the very least, lethal injection is much less horrifying to witness.

As lethal injections have become more prominent, however, so have the mishaps. There have been reports of prisoners moaning and gasping for air, despite anesthesia, and misplaced IVs have resulted in unexpectedly long executions, sometimes requiring a second dose of drugs. In at least one case, a coroner found a Florida inmate suffered severe chemical burns during an execution that lasted 34 minutes. It was determined that the IV was accidentally inserted into his soft tissue, rather than his vein, delaying the absorption of poison.

During media interviews in recent years, Dr. Chapman has blamed any problems on ill-trained executioners. When asked by the international nonprofit Human Rights Watch why he decided to add the third drug to the mix, given adequate amounts of the first two could cause death, he responded, “Why not? … You just wanted to make sure the prisoner was dead at the end, so why not just add a third lethal drug?”

Although there are slight differences in the way states perform lethal injections, the three drugs are the same. The first drug is sodium thiopental, an “ultra short-acting” barbiturate, which in a hospital setting is used at the start of anesthesia, before a stronger drug is given to ensure a patient remains unconscious. The second drug, pancuronium bromide, causes paralysis; it is a substance veterinarians are prohibited from using on animals. The final drug is potassium chloride, a chemical found in road salt that stops the heart.

And while condemned prisoners who challenge lethal injection typically present arguments unique to their cases, most echo the same concerns about the chemicals possibly causing a seemingly peaceful but agonizing death.

“I’ve always argued that the paralytic agent prevents us from being able to collect enough evidence about whether this procedure is torturous,” says Roberta Harding, a University of Kentucky College of Law professor. “They could be experiencing lots of pain, but the paralytic masks that.”

The professor — who points out that a close member of her family was murdered — says lethal injection also is problematic because the amount of chemicals is not altered based on the size of the prisoner, meaning the anesthesia could wear off on a larger inmate, and because ethical standards prohibit physicians from participating.

“Most people assume that we execute people in roughly the same way we euthanize a beloved pet, and that clearly is not the case,” says Tim Arnold, director of the Kentucky Department of Public Advocacy’s Post-Trial Division. “Increasingly we are learning that many states are using an execution method which is intended to present the illusion of a ‘quiet death,’ but which in fact is excruciatingly painful … it appears Kentucky is no different.”

That being said, it’s clear last year’s Supreme Court decision did not resolve all the constitutional questions surrounding lethal injection, a point several justices acknowledged. At that time, it had been more than a century since the high court weighed the legality of a certain form of execution. It’s an interval that will likely be much shorter this time, particularly if problems continue to arise in the execution chamber as they did last month in Ohio.

“When it comes to the Eighth Amendment the court plays the moral relativist. Their guiding philosophy, in the end, is not mercy but uniformity,” says Luke Milligan, a University of Louisville law professor. “When a particular state is acting in a way consistent with the national consensus, the court stays silent. But should that state fall behind, the court will step in to brand it ‘cruel and unusual.’”