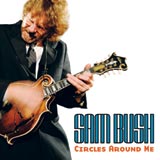 As newgrass (an arguably Louisvillian invention) turns 40, Sam Bush, the genre’s chief architect, continues to construct superb sounds from his adopted Nashville. Besides the genre’s deep connection here, locals will notice a more personal connection upon opening this package. It seems Bush’s latest release is dedicated to the memory of his friend and ours, the late Tim Krekel. Circles Around Me, like much of the Bush canon, features master musicianship throughout. There are tasty instrumentals, old favorites like “Whisper My Name,” and new favorites, too. One of the new standouts is a mournful tune that Bush co-authored with Guy Clark and Verlon Thompson about the sad demise of Stringbean, the Kentucky-born star of the Grand Ole Opry who was murdered in Tennessee. It is also worth mentioning that, in addition to the usual suspects who comprise the Sam Bush Band, Bush is joined here (posthumously) by New Grass Revival cohort Courtney Johnson, and he also collaborates in the flesh with old pals such as Jerry Douglas and Del McCoury. At 57, Bush is probably not as groundbreaking as he was at 17, but his skills just keep getting sharper. And his music is always a treat to ingest.