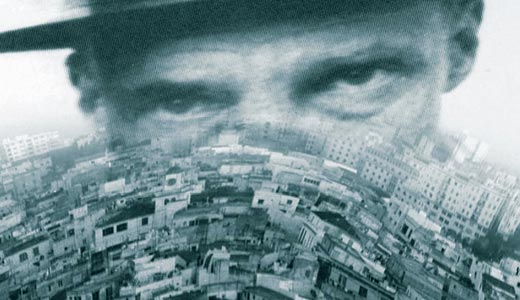 Fifty years later, it seems like this little first step of a time capsule by the self-proclaimed “mythologer of the future” still hasn’t found its intended destination. And who knows — perhaps it was meant for an alternate future that will never be realized. Even now William S. Burroughs’s “Naked Lunch” is weird by most standards. Who’s to say it won’t stay that way?

The future envisioned by this junkie seer was not anywhere along the lines of sci-fi or technology as we know it today. He was instead trying to anticipate a future mindset, one that is not so deeply rooted in the “19th century narrative” he believed the novel to be. He broke up his structure because structure and narrative are illusions, reflections of a human desire for coherency rather than a representation of any real series of events in the world. It’s easier to think of Burroughs as a conceptual artist in this way, that he was experimenting with an end in mind, not just a crazed junkie throwing pages of nonsense into the air. He was trying to break language while at the same time communicating. He was not rabble rousing for the sake of it; he was trying to shake us out of the systems of morals, language and thought of the time. That we have not accepted this work largely because we remain caught in the same conventions and thought/word-traps of 1959 may seem extreme, but it makes sense.

DJ Spooky, one of the more striking picks in this book of essays, argues that Burroughs anticipated the Internet-feed/YouTube culture with his deficit-disorder image snippets and “reality is what you notice” style. The DJ even got his original nickname — “The Subliminal Kid” — and inspiration from one of Burroughs’s later books, “Nova Express.” The Subliminal Kid was a character that Spooky claims was “a sampler … (who) pilfered meaning from the fragments and detritus of the media landscape.” If you know anything about Burroughs, you know about his early experimentation with tape recorders, in which he would record conversations and situations, and then go back later and cut in “trouble sounds” in order to change them. He, in style and practice, was one of the first samplers.

Although love from the arts world may seem like small beans to the mindset Burroughs was attempting to create, it still goes far to prove that Burroughs’s methods are really only treated as “strange” in the literary world nowadays. Painters have been using his techniques for years (collage, anyone?), and even videos are now remixed quickly and readily (Kanye has interrupted just about everyone at this point).

It is in this way that this book of essays serves as an important gesture in a literary/academic world that has largely dismissed Burroughs. The problem is that it will most likely remain just that, a reminder that we are not quite there yet, and that when we do get to Burroughs’s future mindset — one that reaches a level of human self-awareness that recognizes language and structure as an inherently violent and misleading system of understanding that is but one of many possible — his “novel” will no longer be necessary.