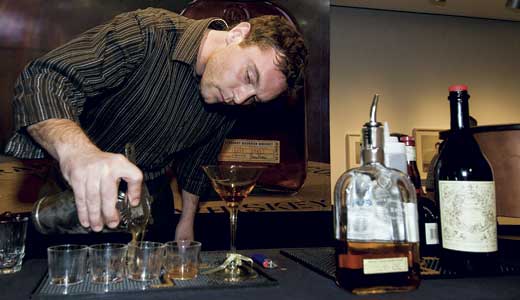 As you know — by reading this column and breathing air in the state of Kentucky — September was Bourbon Heritage Month. I don’t know about you, but thank God it’s October: I barely survived those bourbon-soaked 30 days. In fact, my organs are still pissed; they refused to work last weekend when I bathed them in Huber’s wine. My liver put up a sign that read, “Out to lunch, be back soon.” It’s been 12 days. My digestive tract took a sabbatical. My lungs up and walked out. (I coaxed them back with a 10 percent raise and a trip to Bermuda.) My sweet tooth refused a s’more.

Little is right in my world, which is why I’m taking a leave from Kentucky’s fermented, charred-barrel-aged Jesus Juice.

Like most of my declarative actions, I’m sure it’ll be short-lived and destined to collect dust in the corner of my bedroom. But for now, I’m sticking to fizzy yellow beer that won’t make me pee in public or traipse around downtown at midnight searching for my car.

Let’s look back on the month … and find out when bourbon stopped being polite and started getting real (ugly).

Manhattan Experience — I laughed, I cried, I spilled bitters on myself

On Sept. 28, I was invited to judge a prestigious Manhattan cocktail contest thrown by Esquire magazine and Woodford Reserve. Basically, I sat and tasted (read: guzzled) five variations on the Manhattan by local bartenders. The winner — Jeromy Edwards (from Back Stage at Theater Square Marketplace), with the Cider Manhattan — goes on to represent Kentucky at the final competition in New York on Nov. 9. Edwards’s drink was professionally made, included a flambéed rainier cherry (fire is always cool) and, most importantly, was delicious. I think I asked for seconds … well, at least I remember asking for thirds.

Distillery Live @ Maker’s Mark — Scotch and me go way back

I was invited on Sept. 25 to be part of a live taping of a webcast featuring a discussion between the master brewers of Maker’s Mark and Laphroaig Scotch (check it out at makersmark.com/live), which have more in common than just making you see double.

When Maker’s is finished with their charred-oak barrels, they ship them over to Scotland to Laphroaig Distillery, where they take on a second life as single-malt whisky barrels. The evening included many samples, food pairings and an enlightening conversation on the differences and similarities between the two spirits. I was naturally drawn to the Laphroaig 25-Year, which runs about $500 a bottle. Looks like I’m sticking with bourbon.

Well, one of these months (read: years) I’ll finish the Urban Bourbon Tour and tell you all about it here. It’s a city-sponsored tourism initiative to get you out and about to the finer bourbon establishments in town (check out www.justaddbourbon.com).

Although it includes only seven bars, I’ve made it to three. Basically, you pick up a passport at the Visitor’s Center on Fourth Street, and as you stop in at each destination for a drink, you collect stamps. Apparently you get a prize for finishing, so I’ll have to get back with you on that … you know, when my vital organs stop giving me the silent treatment.

• “So um … This is kind of random, but the Vanilla Ice just poured me a drink”

Send them to [email protected]