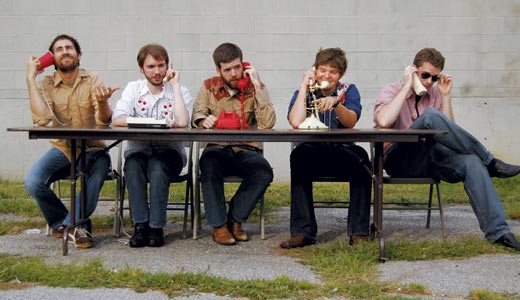 LEO: Who did you all record with?
KK: We recorded at Downtown Studios with Billy Bartley engineering, with some additional overdubs engineered by Jordan Forst.

LEO: How has the band evolved?
KK: Yardsale’s gone through a number of lineup changes, and each of those lineups might as well be a different band. This lineup, which we’ve had for a couple years, is definitely the tightest and most creative that we’ve had. We’ve become much more democratic — everyone offering ideas and having say-so — and there’s a much greater emphasis on finding the best arrangement for a song, rather than just playing it however it comes out initially. We’ve managed to weed out the weak links and become a well-oiled, twang-rock machine. Stylistically, I think there’s a more rockin’ edge this time out, though there’s still plenty of twang as well.

LEO: Any curveballs we should be aware of?
KK: The album has a horn section on a number of tracks, as well as backing vocals by the Sandpaper Dolls on a big chunk of the album. Not sure if that’s really a curveball, but it’s something.