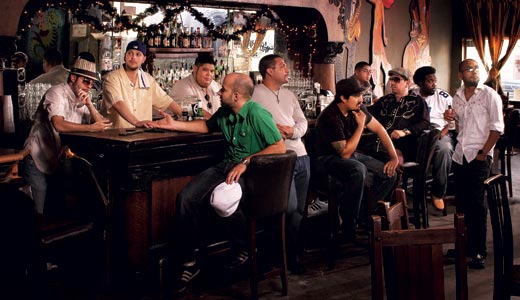 Back in July, we spoke with Grupo Fantasma guitarist Adrian Quesada, and we’re finally getting around to running the interview, just in time for their show on Thursday at the Bomhard Theater (501 W. Main St., 562-0100) at 8 p.m. Tickets are $25. Thanks for waiting, Adrian:

LEO: Grupo backed Prince, Talib Kweli and Marc Anthony all in the same night. How did that happen?

Adrian Quesada: We were playing Prince’s Golden Globes afterparty two years ago. We didn’t know what was really going on until the last minute. We were asked to go out there, and it turns out he didn’t have a band. We were going to be his band. We set up in a corner of a hotel room suite. He was just gonna (sit in) and play guitar with us, but it came back it was this famous legendary Hollywood afterparty that took place. The first person we saw was Diddy — the list goes on and on. I think it was the night that Lindsay Lohan went to rehab.

LEO: What kind of music scene was there growing up in Laredo, Texas?

AQ: For what we did, there was really no music scene. I had a couple of friends with bands. In Texas, there was not much access to funk besides mainstream. My parents might’ve had Kool & the Gang’s Greatest Hits. The funk that I was getting into in high school was through hip-hop. I had MTV, so I was able to discover a bunch of stuff when I was a little kid.

LEO: Grupo was part of a 10-day USO tour of Kuwait and Iraq. What was that like?

AQ: It was our second time actually doing it. We’ve been there twice under two different administrations. We were there last September; then we were there in June. Just seeing the difference and kind of attitude — a lot of people are going home now. Most bases we went to weren’t as tense as they were last time. I wouldn’t call it excitement — somewhere between anxiety and excitement. A good majority of the people we met this time are in a better place.

Our interview with Justin Lewis airs. Next week, we’ll have Adrianne Archie talking about her new release, Heart Soul Mind & Strength. We’re at bluecat.leoweekly.com. Tracks from Archie’s album are at www.adriannearchie.com.