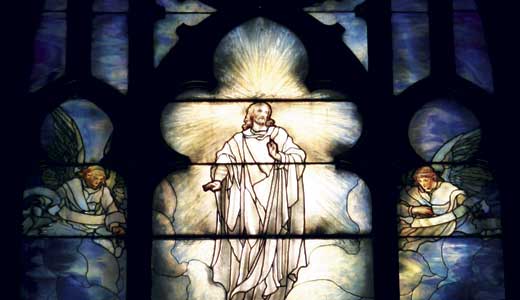 Everyone knows Tiffany. If you immediately thought of the jewelry store, the ’80s pop singer or the movie “Breakfast at Tiffany’s,” you’re reading the wrong story.

In glass, it’s all about Louis Comfort Tiffany (1848-1933). Saying he was just an American glass artist is incorrect — he really was a decorative artist, working in ceramics, metal and jewelry as well as glass. But it is for his stained-glass windows and lamps that he is best known.

Many small-to-large urban areas have Tiffany windows and lamps dotting their cityscape. It’s a sign of increased individual wealth and a surge in church building in the late 19th century. Tiffany’s primary artistic focus was the windows. He felt they were his legacy.

Louisville has its fair share of Tiffany glass, especially in churches.

Calvary Episcopal Church was founded in 1860, with its current building constructed between 1872 and 1888, in the popular Victorian Gothic Revival style. It houses many stained glass windows, including three by Tiffany Studios. The magnificent “Ascension” is over the altar, with Jesus afloat in a blaze of light. The northeast lancet window is “Charity,” while the southeast lancet houses “The Good Shepherd.”

There are five outstanding windows in Christ Church Cathedral, the oldest church in the city. Founded in 1822, it first was designed as a federal meetinghouse. Additions include the 1870 facade and two towers. They also added 15 stained glass memorial windows between 1886 and 1905, including the ones by Tiffany: “The Angel of the Chants,” “The Good Samaritan,” “The Purple Cross” and two titled “Resurrection Angel.”

The church became the Cathedral of the Episcopal Diocese of Kentucky in 1894, with great encouragement and support by the Right Rev. Thomas Underwood Dudley. He served as the second Bishop of Kentucky from 1884-1904. “The Purple Cross” is devoted to his memory.

Tiffany began making oil and electric leaded-glass table and floor lamps in the 1890s. The glass lamps were not something he felt strongly about, and he rarely mentioned them. He viewed the lamps as good business, not a creative endeavor. But they were wildly popular, especially between 1904 and 1912.

The Brennan House Historic Home and Gardens, built in 1868, is a beautiful three-story Italianate house in the heart of downtown Louisville. The doctor’s waiting room has a signed Tiffany Daffodil Table Lamp, while the house contains three additional lamps that were more than likely made by Tiffany. The most impressive lamp in the collection is the Chrysanthemum Table Lamp.

Tiffany pieces started going out of fashion during World War I. Louis C. Tiffany retired in 1919, but his business lived on until 1932. By that time, the lamps were considered gaudy and hideous, and stained-glass windows were not as fashionable as they had been. Even worse is the fact that there was little effort to save the windows — by Tiffany and others — when old structures were demolished.

Fast-forward to the latter part of the 20th century, when historic preservation came into its own. Tiffany items are valued once again for their artistic creativity and quality of workmanship. Today, Tiffany has name recognition, even among people who do not know much about art. Any stained-glass-leaded lamp in the Art Nouveau style is erroneously called a Tiffany lamp. I can’t imagine that would make Louis C. Tiffany very happy.