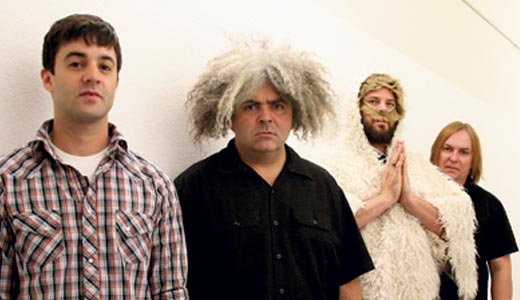 LEO: So the recession’s probably over. How will you celebrate?
King Buzzo: I’m gonna go on a spending spree (laughs). People around you always have these things happen, but you know, what can you do? You just deal with it one way or another. We’re rock ’n’ rollers. As far as political motivation, I try to keep that out of what I’m doing musically. Most (musicians) have some smart-ass thing to say and not a lot of information. You go to the right city in America, it’s gonna be vibrant. You go to the wrong city, those people are going to be suffering, no matter what.

LEO: The recent All Tomorrow’s Parties was a gathering of bands that were popular in the ’80s and ’90s. Do you ever feel like people can’t keep from referring to The Melvins in the past tense?
KB: We’re contemporary, always have been. We put out new records all the time.

LEO: How did this pairing with Down come about?
KB: We knew in the past that they wanted to tour with us — big fans of ours. (Down drummer) Jimmy Bower wanted to tour with us as a fan of our band for a long, long time, and it just never seemed to work out. We were looking for an opening slot, and these guys fit the bill. We’re not some exclusive club. We can play anywhere with anybody. We’re just as at home playing to snooty heavy metal audiences and as we are snooty ATP people.

LEO: What’s Phil Anselmo like in person?
KB: Phil’s never been anything but nice to me. I think it’s well-documented his problems, and he’s wearing all of that pretty heavily. These guys are all a bunch of sweethearts. Usually in opening situations, you’re just eating shit all the time with a bunch of assholes.

LEO: Mono or stereo?
James McNew: Depends on what you’re talking about.

LEO: Mustard or relish?
JM: Tend to use both in combination.

LEO: Shaker or tambourine?
JM: Too close to call, really.

LEO: Three positive attributes of the New Jersey Turnpike.
JM: Shit. Um, let’s see … I have to dig deep on this one: decent gas prices, fast-moving traffic in bathrooms and lack of stoplights.

LEO: Currently reading …
JM: A book called “The Complex” about a former high-ranking (Church of) Scientology member who left and then wrote an exposé. Pretty good.

LEO: Currently watching …
JM: Nothing, because we’re on a bus. I watched an episode of sort of an extreme travel show (“At Full Volume”) starring the former bass player of the Black Crowes named Johnny Colt; I thought it was a comedy at first. Turns out he loves living life to its fullest. I learned quite a bit from the show, realizing that my life is so much more awesome than Johnny Colt’s.