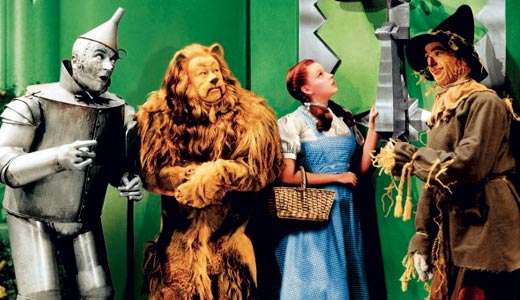 The Wizard of Oz

A fun family flick of ginormous proportions. The voices of Reese Witherspoon, Hugh Laurie, Will Arnett, Seth Rogen, etc., are perfect, but it’s the slapstick camaraderie of the “monster”-misfits, called into service to defeat a giant alien armored walking-thing, that makes it work. And, unlike some previous DreamWorks CGI-animated outings, this one is actually funny! Fewer pop-culture references and more heart. Not yet in 3-D, except for a fun short, “B.O.B.’s Big Break in Monster 3D,” found on the $34.95 double-disc set.

THE WIZARD OF OZ

In 2005, we wrote: “A three-disc Collector’s Edition that may actually be the final DVD version of this all-time classic. HD quality picture, more than 10 hours of bonus extras, and even more commentary by anyone who has ever SEEN the damned movie!” Well, they topped it! Now a five-disc set including a doc on director Victor Fleming, the TV movie “The Dreamer of Oz” and — best of all — the 2007 Hollywood Walk of Fame Salute to the Munchkins! And if you haven’t invested in Blu-Ray yet, here’s your reason to take the plunge: This thing was MADE to be seen in hi-def.

A MUPPETS CHRISTMAS: LETTERS TO SANTA

Not the best “Muppets” ever, but it’s fresh breath of holiday air, nonetheless. Paul Williams once again writes the songs and does a guest-spot in this celebrity-laden musical tale of Kermit and friends trying to get wayward letters north before Christmas. Beware of the Fozzie/Gonzo duet about wishing to be Santa — it will stick in your head forever!

This star-studded adult comedy about life and family is a sublime treat. A long-acquainted unmarried couple (John Krasinski and Maya Rudolph) get pregnant. Wishing for better family ties, they decide to move across country, closer to his parents (Catherine O’Hara and Jeff Daniels). But then his parents decide to move to Belgium! The fun is in all the little hurts that stick in everyone’s craw along the way. Trust us, this is a hoot.

A four-disc boxed set of the “Cagney & Lacy” movies. Never heard of them? “C&G” (1982) was the most celebrated feminist cop-drama in TV history, the only one to ever win twin Emmys for Best Dramatic Actress. After six years on the air the stars, Tyne Daly and Sharon Gless, ended it, wanting to move on. A decade later, the studio asked for an update on the characters, resulting in a series of TV movies that recorded the highest viewership ever for such an event.

Clearly inspired by “The Terminator,” this low-budget/high-gore masterpiece of terror is now available uncut on Blu-Ray in a two-disc Collector’s Edition. Post-apocalyptic scavenger Dylan McDermott gives Stacey Travis a scrap robotic head to use in her sculptures. But the head belonged to the most murderous, vicious and cruel combat-droid ever devised — and it can reassemble itself! Later edited down and released as “Brave” (1994), this was the inspiration for 1999’s excellent “Virus” with Jamie Lee Curtis. Recommended.

This odd romantic comedy got absolutely zero promotion by its studio when first released to theaters, which is why you probably never heard of it. Loser/night-manager Steve Zahn (who lives today on a horse farm in Lexington) falls head-over-heels for comely Jennifer Aniston when she checks into his hotel. She rebuffs his weird advances, so he cleans up his act and tries again, this time running afoul of her psycho boyfriend, Woody Harrelson. Definitely worth a look.

June 1979: Amnesty International’s famed benefit show features such names as Clapton, Beck, Gilmour, Sting and Geldof. But this show will always be remembered for one performance: The Who’s Pete Townshend doing a devastating acoustic version of “Won’t Get Fooled Again.” This single act is credited with inspiring the entire “Aid”-music movement and the “Unplugged” phenomena that flourished over the next two decades. This vid features selected works culled from 30 years of S.P. concerts.

Mark Ruffalo and Adrien Brody are conmen brothers who live out fantasies on other people’s money. Their next mark is the beautiful, batty and bored heiress Rachel Weisz, who becomes so entranced with their adventures (which include a Japanese explosives expert) that she joins them on a ’round-the-world ocean voyage. Of course, only love can screw up such perfect fantasy. Love, and a brother who might be planning to bring it all to a dangerous end. Do not miss this film!

Prior to launching “The Toxic Avenger” and forever changing the way that movies were made, Lloyd Kaufman and Michael Herz created four of the raunchiest teen sex comedies in history. The inspiration for both “Porky’s” and “Screwballs,” these ’80s outrages stand today as monuments to their genius. Now packaged in an incorrigible box set: “Squeeze Play,” “Waitress,” “Stuck on You” and “The First Turn-On” (the screen debut of Vincent D’Onofrio).

HE-MAN AND THE MASTERS OF THE UNIVERSE: THE COMPLETE SERIES

HOW I MET YOUR MOTHER: SEASON FOUR

LIFE ON MARS: THE COMPLETE SERIES

THE PATTY DUKE SHOW: SEASON ONE