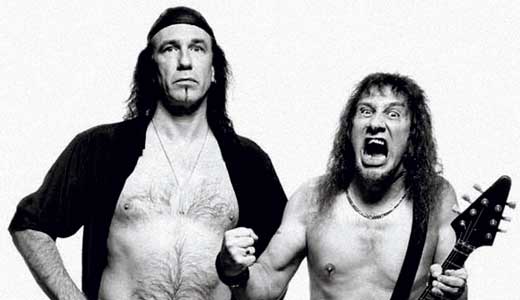 Has it really been over a decade since skinny, mini-skirted Calista Flockhart redefined the term “legal briefs”? (And if you back the calendar up another decade from there, you’ll find Calista fresh out of college and doing Louisville regional theater for $50 a week! Really!) Entertaining as hell thanks to a killer cast of crazies including Jane Krakowski, Lucy Liu, Peter MacNicol, Gil Bellows, Greg Germann, Courtney Thorne-Smith and Portia de Rossi — all under the watchful eye of TV wunderkind David E. Kelley — now packed into a 32-disc boxed set with all the requisite remembrances. Recommended.

ANVIL!: THE STORY OF ANVIL

Forget “Spinal Tap,” “School of Rock” and all your Guitar Hero fantasies: This is the best movie about the love of rock ever made. A documentary/true-life train-wreck about a Canadian band that swore allegiance as 14-year-olds. Yes, they were gonna be Rawk Gawds someday and make music forever. Now, 13 obscure albums and three decades later, they’re still trying. Follow along as they once again set out on the tour that just might lead to immortality. Alternately hilarious, tragic, warm, odd, loud, stupid and humiliating, this is what being in a rock band is all about. Absolutely priceless.

Part of a new line of “workout” videos starring the sexiest, healthiest women ever to draw a sultry breath. Trust us, your heart rate will double without getting off the couch — and there’s no stupid football game to get in the way of the action!

The best thing Eddie Murphy has done in decades. Breaking free of his Disney stranglehold, here he’s free to improvise and have fun with his little co-star (who nearly steals the movie), Yara Shahidi. She plays his daughter, and it is her childish imagination that restarts his creative juices, reviving his career. And don’t let the PG rating keep you away — this is good stuff.

The “Master of the Documentary,” Ken Burns has created his masterpiece. This 12-hour/six-part look at our national parks is far more than just the greatest travelogue ever lensed — it is a time capsule of America, a living history lesson that will leave you breathless and recharged with that “American can do anything” spirit that years of Republican rule has soured. Best of all, it’s a tapestry of Americans — rich, poor, famous, infamous and unknown — who gave of themselves to save the best of America to inspire generations unborn. Remarkable.

The very definition of the American sitcom, this ’60s turkey is lively, fun and surprisingly smart. Inspired by the “Frances, The Talking Mule” movies, Alan Young (“The Time Machine”) stars as the unwitting new owner of a talking horse when he buys a home for wife Connie Hines. All 26 episodes from the first season with Western vet Allan Lane as the voice of the horse, of course.

MY LIFE IN RUINS

Nia Vardalos tries once again to catch lightning in a bottle a la “My Big Fat Greek Wedding,” this time babysitting a cache of American tourists in Greece, including Richard Dreyfuss. For MBFGW fans only.

A hilarious, outrageous and thoroughly entertaining look at “OZploitation”: those over-the-top, sex- and blood- and action-fueled Australian flicks that stormed our shores during the ’70s and ’80s. The best 103 minutes imaginable, mates.

PROTOTYPE THIS!: SEASON ONE

If you’re a fan of “Mythbusters” and miss “Junkyard Wars” as much as we do, you should be checking out this Discovery Channel offering. In a “secret” warehouse on an island in the San Francisco Bay, PhDs and associated brainiacs dream up and build the coolest machines imaginable.

RED DWARF: BACK TO EARTH

In its latest incarnation, “Red Dwarf” gets back to doing what it does best: a small cast working with a great script by Doug Naylor, and absolutely no budget to get in the way of the story. Rimmer, Lister, Cat and Kryten are joined by a new holographic senior officer, Russian Katerina, who refers to Lister as “is bit crap.” Together they finally find Earth of 2009 … And more smeggin’ trouble.

SNOW WHITE AND THE SEVEN DWARFS

First Blu-Ray release of Uncle Walt’s masterpiece. Ho, hum. Why the ennui? As much as we love the idea of seeing Snow White in Blu-Ray, this movie belongs in the theater with a new generation of children — and their fathers and grandfathers — every seven years, just as the Old Man wanted. Pimping it out to video along with the latest crap-fest from The Rock or Hanna Montana just seems obscene. The more expensive sets include collectable books and plush toys.

Eagerly awaited horror release from G. Cameron Romero, son of George, starring Kathy Lamkin (Tea Lady from the “Texas Chainsaw Massacre” remake) and drop-dead gorgeous Cristen Coppen from every dream we ever had.

A wonderfully creepy little horror/thriller about children turning psychotically evil at Christmas (which we thought was funny, since that’s the one day of the year when they’re usually NOT psychotic and evil). The best part of it, though, is the way the premise is never fully explained. We liked it.

An unfunny toss-off comedy starring Jack Black and Michael Cera as cavemen who accidentally find themselves in the middle of Biblical history. Surprisingly lame, considering it was written and directed by Harold “Animal House” Ramis.

MAN VS. FOOD: SEASON ONE