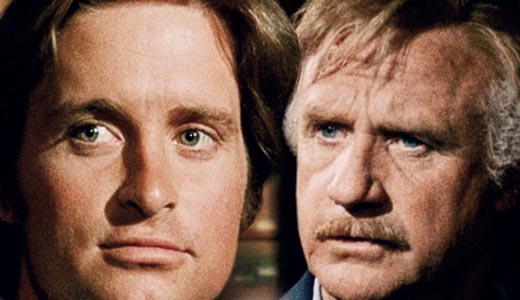 LOVE AND PAIN AND THE WHOLE DAMN THING

Movies from the ’70s are a mixed bag. That decade contains some of the most profoundly moving moving pictures ever to come out of the West, but they are forever tainted as if from a shrouded time the world seems determined to forget. Case in point: this lost Maggie Smith/Timothy Bottoms December/May comedy/love story about a naive young American who falls in love with a sad middle-aged Englishwoman in Spain, despite the clucking tongues of the world around them. A real gem, highly recommended.

For those of you too young to remember: In 1970, there was a war going on, and more importantly, it was not a volunteer gig. If you were male and 18, you were almost certainly crouching in a cold, wet rice paddy waiting to kill. Or to die. As a result, many young men left the United States and moved to Canada for their health. This early Michael Douglas film tells of a young man, prepared to “do his duty,” but is drafted just as his life starts to unfold. He chooses Canada, putting him at odds with his Army-vet dad Jack Warden (who was expelled from duPont Manual High School for fighting … really!). Be warned: The ending of this film will haunt you for weeks.

A devilish take on the “10 Little Indians” slasher flick from Argentina. Six young women reluctantly go to a desolate home for the birthday of someone they’d rather forget. But from there, it gets disturbingly original.

We can’t believe they actually pulled this off! Jason Statham, who spent his “Crank” screen-time keeping his adrenalin turned up to 11 to counteract a poison in his system, returns, this time with an artificial heart that requires constant surges of electricity to keep beating! His goal? To find the bastards who stole the original and get it put back in. Amazing.

Miguel A. Nunez Jr. leads a group of sexy, demented women on a car-jacking spree in this “Grand Theft Auto”-inspired rap-fueled push-da-pedal-and-shut-off-you-brain actioner filmed — of course — on location in the streets of L.A. Probably as close to a GTA movie as we’ll ever get.

This “X-Files” wannabe doesn’t have the storytelling chops of Chris Carter, but it does have the limitless imagination of J.J. Abrams — and his flair for special effects. Oddly sexy Anna Torv stars as an FBI agent thrust into the bizarre world of a former scientist/mental patient whose lost memories include horrible experiments in teleportation, genetics, invisibility and expanding the human mind — and apparently, she was one of his victims! We’d like to see more hard science to back up the storylines, but that’s just us. Damn good TV.

This episodic CBS horror-whodunit is a good experiment in what may be a new direction for network TV. A series of guests at a Seattle island get killed off a la “10 Little Indians,” each in a way that ties them to a series of previously unsolved murders. Is someone exacting revenge, or is the same killer at work again? The DVD, freed from the censorship of broadcast TV, is rumored to contain far more shocks and interactivity than the broadcast version.

RISE OF THE GARGOYLES

More SciFi Channel CGI-Xcrement, made in Bucharest, Romania, then padded out with a few exterior shots of Paris, France. With Eric Balfour as a scientist, and Nick Mancuso as a priest, you know that this has to be a real stinker. OK, yeah, we liked it … with soaper Tanya Clarke as a sexy blonde.

A pair of truly twisted and wretched indie Japanese splatter films starring Keisuke Urushizaki. Recommended for fans of hard-core oriental eviscerators only — and those should bring a note from their doctor!

THE NAIL: THE STORY OF JOEY NARDONE

Tony Luke Jr. — South Philadelphia’s famous “Cheesesteak King,” whose cheap, lively, locally produced TV ads have been an Internet staple since 1992 — stars as a haunted ex-boxer, recently released from prison, who rebuilds his life with the help of a struggling 14-year-old kid. A good, old-fashioned bit of regional filmmaking; worth checking out.

This is high on all the artsy-fartsy movie critic’s lists, but it seems more like an overlong episode of “Queer Eye” to us. A behind-the-scenes look at fashion legend Valentino, apparently the single gayest guy-god on the planet. Flamboyant doesn’t begin to describe his precious lifestyle, near-dictatorial hold on the Western world’s clothing choices, nor his army of prissy sycophants who follow him around, twittering like birds at his every utterance. Yes, there’s something fascinating about his life, but we’ll be damned if we can figure out what it is. Check it out for yourself and let us know. OK?

ONE FOOT IN THE GRAVE: THE COMPLETE SERIES