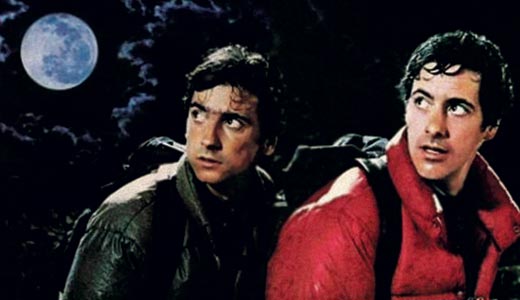 An American Werewolf in London

AN AMERICAN WEREWOLF IN LONDON

One of the best lycanthropedic laments ever lensed! And now on Blu-Ray! John Landis directs once-bitten/twice-shy David Naughton in Rick Baker’s groundbreaking makeup, but it’s sidekick Griffin Dunne who steals the show as Dave’s undead and decaying friend who must walk the world in limbo until the werewolf — David — is destroyed. Frank Oz created the mechanical “transformation” sequences, and Jenny Agutter is cute as ever as the Limey nurse who ends up doing it doggy-style. Grrruff! Our highest recommendation.

The latest release from the vaulted Universal Legacy Series stars one of the worst actors in their canon, former plumber Lon Chaney Jr. Unlucky chump Larry Talbot (Lon) gets bitten by a gypsy werewolf (Bela Lugosi, still pissed for turning down the lead in “Frankenstein”), suffering the tortures of the damned and a nasty flea infestation before turning into a wolf and sniffing up grandma-of-all-scream-queens Evelyn Ankers. His sensible pop (Claude Raines) mercifully clubs the cub to death with a cane for not using the papers. With cool bonus stuff.

In one of our all-time favorite movies and winner of eight Oscars, Tom “Animal House” Hulce is terrific as the heaven-sent composer who spends his life in the shadow of a stern, uncaring father. But it’s F. Murray Abraham as his rival, Antonio Salieri — his sanity slipping away in awe of the young composer’s gifts — who steals the show. Simply perfect and now available in a Blu-Ray Director’s Cut. (You may also notice Jeffrey “Howard the Duck” Jones as the Emperor. In 1974, he was at Actors Theatre of Louisville, performing in everything from Shakespeare to a well-remembered version of “Frankenstein,” which we think is long overdue for a return engagement.)

DARK SHADOWS: THE CURSE OF THE VAMPIRE

Our good buds at MPI Home Video have gathered two well-chosen storylines from the original “Dark Shadows” gothic horror soap and released them at a terrific price. The first, “Curse of the Vampire,” follows the long history of Barnabas Collins (Jonathon Frid) from his pre-vampiric origins through his various incarnations over time, with all the mystery and mayhem that entails. The second, “The Haunting Of Collinwood” ($19.95), focuses on Quentin Collins (David Selby), the werewolf. About three hours each.

Simply put: The most wretchedly disgusting and misogynistic horror film ever made — and one of the most entertaining. Two high-school losers stumble upon a naked, undead woman (Jenny Spain) chained to a table in an abandoned hospital. Guess what the horn-dogs do next? Yep. Then more dimwitted high-schoolers show up for a piece and wind up either dead, with their intestines floating in a toilet or their penises bitten off. From there it gets seriously weird. A savage commentary on the pain of growing up, or just an excuse to rape a zombie hottie? Why not both!?

Jessica Biel and Kristin Scott Thomas are simply delightful in this spry and vibrant remake of a 1928 Noel Coward comedy of manners and morals. During the “flapper era,” Colin Firth brings his new wife (Biel), a race car-driving American feminist, home to meet mummy and duddy at their Limey country estate. What follows is sheer poetry as the snooty family is shocked into accepting this free-spirited force of nature that their son has dropped into their gene pool. If it doesn’t sound like much, just trust us: It’s a major hoot.

Donald Faison, Mike Epps and Wood Harris star in a solid little indie crime-comedy that deserved more time at the theaters. A pair of brain-dead petty criminals accidentally receive a huge shipment of cocaine. Before they can cash in on the mistake, however, the real owners show up. Not terrific, but far better than it had to be.

ONE STEP BEYOND: THE OFFICIAL FIRST SEASON

“One Step Beyond” was a horror anthology show that premiered about the same time as “The Twilight Zone.” Directed/hosted by John Newland, it lasted three seasons and was known for its stark noir-ish sets, and more realistic shocks and terror than TZ. Unfortunately, the production company came unglued before a fourth season could be filmed, leaving the original segments to rot in the Public Domain Hell: all available source material fell into disrepair, scratchy and faded. Until now, that is: 22 restored episodes on three discs.

THE AXE OF WANDSBEK

A fictional drama set in Nazi Germany about a mild-mannered town butcher who, facing ruin, agrees to execute several political prisoners for the Third Reich. Directed by a former anti-Nazi resistance fighter, it was banned in its native Germany until 1962, when it was released heavily edited. This DVD contains the original theatrical version that was not seen until 1981.

This Chinese/HK morality play/crime caper (“Tie saam gok”) tells of a group of good friends, down on their luck, who are tempted by an outsider to retrieve an ancient treasure buried beneath a building in central Hong Kong. Told in three episodes, each presented by a different master-director (Tsui Hark, Ringo Lam and Johnnie To), the theft, itself, is not as important as how it affects the friends.

Hugh Jackman and Liev Schreiber quite literally chew the scenery (and the cables and the co-stars and …) in this revised genesis of Jackman’s Wolverine character. They are mutant brothers, seemingly immortal, but Schreiber’s “Sabretooth” is a remorseless killing machine who enjoys torturing his victims. The rest of the massive cast gets lost in the brothers’ battle, which is just as well since they are the most interesting part. A fun direction for the franchise, which suffered a major loss of momentum from “X-Men III: The Last Stand.” (A script in the works moves Wolverine to Japan for the sequel.)

MY NAME IS EARL: SEASON 4