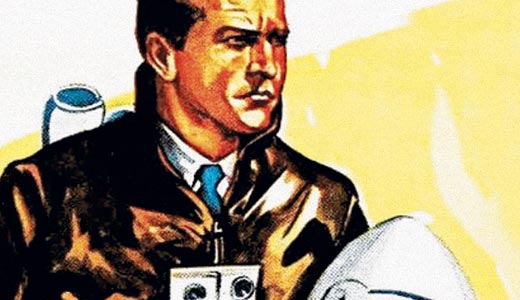 How does one explain this film? It is badly written, poorly acted, has no blood, violence or special effects to speak of — it doesn’t even have a villain! — yet it may be the most perfect indie horror movie ever made. An amateurish Twilight-Zone-by-high-schoolers cheapie, to be sure, but its moonlit scenes of a decaying, lakeside amusement park will haunt you for days. Now colorized for some dumb reason, but the set includes a nice, cleaned up B&W copy; simply a must-own for any fan of simple-but-effective cinema.

ZOMBIES OF THE STRATOSPHERE

You’ve seen scenes of this film all your life but never knew where they came from. Remember that B&W clip of a guy wearing a bullet-shaped rocket helmet? On his chest is a knob that says “Up-Down-Left …” He leaps toward the camera, twisting his, er, knob, and, in a whoosh — takes off to the skies. That, dear friends, is from this immortal Saturday movie-serial about a courageous scientist trying to save the world from nuclear alien fiends, with disaster never more than a cliff-hang away. True camp/cult history, and a must for any good Rocket Party. Twist me knobs, Suzy! Away!

A six-disc set of dark-continent travelogues and tame savagery for the Barco-lounge bon vivant. We love to cue this up on a Sunday and hit the couch.

The latest in the “all rural people are low-rent in-bred cannibal-mutant-rapists” genre. Certainly no worse than we’ve seen, lightened by a nice, sick take on the inherent sadism of Christian Fundamentalists. And how can you not love that title?!

A first-rate bit of animated sci-fi that was shot down by snarky movie critics when it first hit the theaters. Evan Rachel Wood and Luke Wilson head a voice cast of massive proportions in the tale of a beautiful, peaceful planet being invaded by the desperate, soulless remnants of a once-mighty race — from the planet Earth!

A new ABC crime/romantic drama featuring one of our favorite actors, Nathan Fillion (“Serenity”). He’s a crime novelist, the foil of a pretty police detective (Stana Katic). Together they fight, argue and get hot while solving crimes. Has a nice “Moonlighting” feel to it, without being cliché. Worth checking out.

Toward the end of the Slasher Decade, TV producers attempted to cash in on the violence, usually with lame results (i.e. anything with Robert “Freddy Krueger” Englund). This one was the exception. Frank Mancuso Jr. created this fairly intelligent tale of an antique shop full of cursed objects and the new owners who set out to recover and destroy those besetting mankind. Head-and-shoulders above the rest.

The best thing about this old cable-TV tale of a widower and his daughter is the cast. Michael Ontkean (“Twin Peaks”) is the dad, and 16-year-old Ellen Page is the daughter who comes to suspect that their new home is being haunted by the feline demon of the previous owner.

GHOSTS OF GIRLFRIENDS PAST

Matthew McConaughey and Jennifer Garner are a match made in haha-heaven in this lightweight romantic comedy. He’s a cad and she’s just soooo doable, but the secret ingredient is Michael Douglas as the shade of his former uncle who shows him the error of his callous ways. A nice date-flick.

Fascinating doc on artist Isaiah Zagar, who has spent the last 40 years decorating Philly with more than 50,000 square feet of mosaic murals chronicling his love for his wife, Julia.

Seth Rogen stars in this low-rent “Taxi Driver” spoof about a mall security guard whose life is disrupted by a serial flasher. Not the lighthearted, upbeat comic toss-off you’d expect — which is why a lot of people didn’t like it — but wonderfully dark and twisted fun.

A long-lost sexploitation treasure, resurrected for your confusion. Mickey Hargitay (husband of Jayne Mansfield and dad to Mariska Hargitay) stars with Rita Calderoni and other amazing anti-grav Italian nekkidwomen in an embarrassing time capsule from the psychedelic ’70s. We’ll be damned if we can explain the plot.

THE HAUNTED WORLD OF EL SUPERBEASTO

Fans of Rob Zombie will recognize “Beasto” as his masked wrestler/superhero comic-book creation, and this as the long-awaited animated debut. Completely over-the-top as only RZ can do it, El-B — Man of Action, Self-Promotion and Violence — and his ultra-sexy sister Suzi X (Sheri Moon Zombie), must stop the marriage of Velvet Von Black (Rosario Dawson) to the diabolical Dr. Satan (Paul Giamatti) — and kill everything in sight! With a deranged soundtrack and friends Sid Haig, Dan Roebuck, Elvira, Clint Howard, Dee Wallace, Tura Satana and Danny Trejo, how can this not be demented?

WALLACE AND GROMIT: A MATTER OF LOAF OR DEATH

After a fire destroyed the Aardman studio, we were afraid we’d never see our buddies W&G back on the telly, but here they are as big as life! The boys open a bakery (thanks to one of Wallace’s patent-pending Rube Goldberg inventions, of course), but a crusty murderer interferes with their rising popularity. Worse yet, Wallace falls in love, leaving poor Gromit to knead out the killer before the two of them are the next to get sliced! Fabulous.