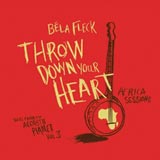 Enslaved Africans in early America invented the banjo, a combination of several indigenous African instruments. Fleck pays tribute to this and expands his own experience with his chosen instrument via his latest. Throw Down Your Heart is a fantastic document of Fleck’s recent excursion to Africa and his encounters with the musicians he met there. Some are known (Toumani Diabate, Oumou Sangare, Vusi Mahlasela), while others are townspeople who approached Bela’s entourage. It is telling just how seamlessly Fleck’s playing combines with the other musicians and singers, a testament to his own skill as well as the talents of the guests. “D’Gary Jam” is mesmerizing, a 20-person event that had its birth in a Nashville studio, with overdubs happening as they traveled. “Pakugyenda Balebauo” may just be the first African prog-rock song, its lyre sounding more like Alan Parsons’s echoing synthesizer than the rather slight instruments would suggest. A documentary film is supposed to be coming down the pike sometime, at which point I hope more of this brilliant music is unearthed and shared.