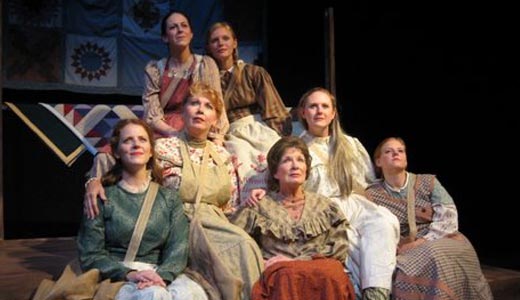 In this day and age, it’s difficult to be interested in a musical about women quilting, and yet that’s what struck me in “Quilters,” Bunbury Theatre’s season opener. The lives of our foremothers are quite interesting.

The musical depicts the many different experiences of a pioneer woman: Some of the experiences are funny, some are quite tragic, but all allow us a glimpse into their challenging lives. The stories are told in song, monologue or scene, and the storyline that ties them all together is the life of Sarah, played wonderfully by Carol Tyree Williams. She is making one last quilt for her daughters and with each pattern, a new story is told.

The music in “Quilters” is not what you would find in a traditional song-and-dance musical full of large, show-stopping numbers. It feels more like a family gathering on the porch to sing, with Tim Baker on piano as the only accompaniment. The voices of the seven women range from folksy to operatic, but they fit well together, especially in a cappella harmonies.

The set of muted wood floors and four raised playing areas works well for Matt Orme’s direction. He takes advantage of the space, successfully using every inch for the action. Donna Lawrence-Downs’ costumes, with various fabrics, textures and prints, are muted as well, allowing the vibrant colors and patterns of the quilt squares to stand out.

There are some sound effects that help set the scenes — like the howling wind outside a schoolhouse or the creaking of a newly built log cabin — but there are times when the sound upstages the storytelling. There is a moment in the first act when a girl loses her younger sister to harsh winter weather. It is intended to be tender and emotional, but was difficult to follow because of distracting canned sound effects.

The strength of this show lies in its simplicity and in the genuine connection the actors have with their characters and each other. Each actor plays a range of characters, and each character, varying in age and experience, is fully formed and three-dimensional. This makes even the smallest moments — a look, a sigh, a pause — have meaning.

All the acting is strong, particularly Marcia Miller and Sara Renauer, and though it is an ensemble piece, it is Williams who carries the show as the matriarch of a family.

This production proves all the actors’ abilities, yet it never feels as though they treat the material as a showcase for their own talents. It is to Orme’s credit in his direction that he trusts that the actors, and the stories being told are captivating enough to hold the audience’s attention without needing excessive staging effects.

“Quilters” tells the stories of women who have survived difficult times, and these stories are in quite capable hands.