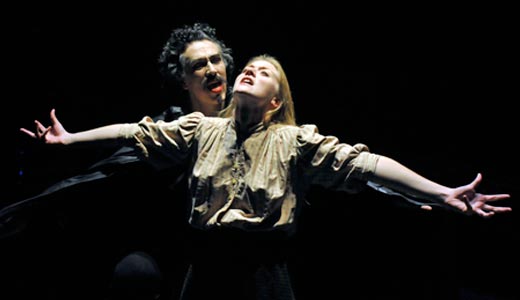 So many books, films and television shows about vampires have permeated our culture these past few years that it’s difficult to remember they were at one time terrifying and not representative of a romantic ideal. It’s practically become a must for the perfect boyfriend to be cute, sweet and, of course, undead. And so seeing Actors Theatre’s production of “Dracula” is refreshing — that famous fang-toothed, caped fiend is formidable and not super sweet.

The show opens in a mist-laden cemetery at night … and then come the screams. Lots of bloodcurdling screams. It instantly brings you into a world where monsters that suck your blood and turn you into a creature of the night are bad. It’s Bram Stoker’s “Dracula,” as adapted and directed by William McNulty. In case you don’t remember: A mysterious count moves from his Transylvania home to the neighboring castle of an English doctor and sanatorium. Curious things begin to happen: Women become ill after puzzling bite marks appear on their necks; strange howling sounds drift through the night air; that new neighbor keeps arriving uninvited. And so Van Helsing is called in to help.

The play shifts from creepy, disturbing moments, as when the physician’s assistant becomes possessed, to fun Halloween entertainment, with screams and smoke and howls till your heart’s content. It remains in the latter for much of the play, but luckily never slips into camp — McNulty’s direction allows for as many laughs as possible without winking at the audience.

Renfield (Marc Bovino), the local lunatic, provides most of the comic relief. His intense physical and vocal abilities balance lunacy and eerie comprehension. And playing against Renfield’s histrionics is Van Helsing’s cool demeanor. Van Helsing (McNulty), a professor fascinated with the occult, attempts to keep his wits about him while trying to rid the world of the demonic killer. That demonic killer, of course, is Dracula himself, played by Randolph Curtis Rand, as diabolically as possible without seeming comical in a cape with red eyes and a shock of curly hair.

The sets, costumes, lighting and sound have been redesigned this year, with successful results. The actual monster is clad in a mask and tattered clothing. The mask, designed by resident costume designer Lorraine Venberg, doesn’t appear to be a mask at all but the raw face of some unknown creature. It’s further brought to life by animalistic movements and snarls in stereo.

Paul Owen’s new set includes various locations that alternate fluidly from graveyard to office to crypt. The stone border and gated entrances create a claustrophobic atmosphere, while the slamming of doors and pyrotechnics keep the audience jumping.

It’s clear why Actors Theatre has continued this production for 14 years. But it’s not so much a night of chilling frights as it is a nostalgic show, reminiscent of a time when vampires were the stuff of nightmares.