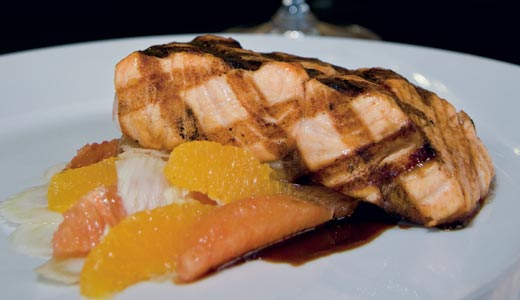 It didn’t matter whether I was decked out in fancy all-weather wool slacks on a Thursday evening or well-worn jeans for a Tuesday lunch: No matter the fabric, no matter how I folded and knotted the thing, the slick, slippery burgundy polyester napkin would not stay on my lap.

I must have invoked the five-second rule a dozen times or more, grumbling every time I plucked my fallen napkin from the floor, during a couple of recent meals at New Albany’s otherwise delightful Windsor Restaurant and Garden.

Come to think about it, the irritating napkin slide was just about the only nit I could find to pick with this splendid eatery, a worthy successor to the late and still lamented Bistro New Albany.

Young co-chefs Justin McMillen and Cory Cuff were barely old enough to legally sample their own wine list when the classy dining room and bar, with its lovable New Orleans-style patio, reopened in the old New Albany Inn last year.

Their style belies their age, with a sophisticated and consistently well-prepared evening menu and a fine, simpler set of soup, salad and sandwiches at the noonday hour.

It’s well worth the trip, even for Hoosier-wary Kentuckians. We picked up our pal Lucinda in St. Matthews and shot across I-71 and I-64 and over the Sherman Minton Bridge, pulling up to a prime parking place in front of the Windsor in 15 minutes, maybe a little less. Heck, it can take longer to get to Springhurst!

Those who remember Bistro New Albany fondly won’t find the style of the Windsor unfamiliar, although there’s been a little painting done. The front dining room walls are now a light cafe au lait; the main dining room is somewhere between stone and sage. They’ve painted over the wacky art that gave Bistro New Albany its idiosyncratic feel: Gone are the tiny angels that once flew through clouds and sky around the dining-room ceiling; the offbeat Vieux Carre mural has been replaced with something like Tuscan topiary.

But the 140-year-old building, once a small hotel, still boasts its high ceilings and antique-look ceiling fixtures and woodwork. Tables are draped in black cloth and set with the aforementioned slippery napkins. Single roses in tall bud vases decorate the tables to underscore a scene of simple elegance.

The dinner menu features the chefs’ creative, internationally flavored takes on down-home fare (“pizza” on Indian naan bread, anyone?), with about eight appetizers ranging in price from $8 to $12.

Main courses, wisely held to about a half-dozen so the kitchen can focus, are $16 (for grilled chicken) to $25 (for pan-roasted beef tenderloin). Many of the dishes feature offbeat fruit-and-savory flavors, but they steer well clear of the trap of excessive sweetness. Optional side dishes ($3 each) include potato puree, sautéed summer squash, fettuccini, corn pudding and the remarkable Windsor fries, seasoned with rosemary, thyme, sage, garlic and Parmesan.

The wine list is short but nicely chosen. Many of the selections are attractively priced in the $20s and $30s. Lucinda, a fellow wine-geek, found an affordable beauty in A to Z Pinot Noir from Oregon, modest in price at $32 but full in flavor. (The beer list and cocktails are also appealing.)

We started with two appetizers and three forks. “Cure” ($11) consisted of a pretty rosette of lox-style salmon cured with beets and horseradish. It came with a spread of cream cheese, capers, Kalamata olives and dill, with thin-sliced ovals of baguette toast.

All three main dishes were fine.

Grilled chicken ($16) and grilled salmon ($18) both bore an appetizing decoration of crisscross grill marks. The boneless chicken breast was served on al dente fettuccine with leeks and pine nuts in an herbal vinaigrette.

The grilled salmon ($18), a boneless fillet, was billed as “pomegranate lacquered,” a subtle treatment that added a hint of tart-sweet fruit to the mix. The salmon was served slightly rare at the center, as ordered, and garnished with a tangerine and fennel slaw.

We thought we were too full for dessert, but were so intrigued by the idea of goat-cheese ice cream that we couldn’t resist a three-way split … and the peach cobbler it came on ($6).

Service was excellent throughout, and the mood was amiable yet not noisy enough to inhibit conversation. With the wine and a cup of coffee ($1.50), a near-luxurious dinner for three came to $121.44. Splitting the tab three ways brought the share for two to an entirely reasonable $81.44 plus $20 tip.

A couple weeks later, Mary and I went back for lunch. We found a simpler selection of apps, salads, sandwiches and wraps (plus a soup of the day), with nothing on the menu over $10.

We requested rye in favor of the usual bun on the codfish fillet ($7.95), but I wasn’t entirely happy with the forgettable, barely toasted, grocery-store “marbled” rye. The fish was decent, though: Two good-size fingers of mild white fish were coated in a crispy, thick, golden breading that looked quite a bit like Long John Silver’s version but tasted much better.

The Black Angus grilled burger ($8.25) was even better. We’ve been eating a lot of good burgers lately, and Windsor’s ranks high up in the hierarchy. A hefty patty, ordered medium-rare, may have been cooked a bit past that point, but it remained juicy, beefy and, best of all, infused with a seductive woodsmoke flavor, presumably from the grill. It was perched on a decent burger bun that gained flavor and texture interest from a quick stop on the hot grill, and dressed with lettuce, a juicy tomato slice and, for 50 cents extra, a slice of mild, melted cheddar.

One side comes free with each sandwich. Homemade potato chips looked great — full rounds sliced thick off the spud, skin on — but might have stayed in the fryer a little longer for maximum crispness. A green salad consisted of standard-issue mesclun with a tomato slice, shredded carrots, cucumber slices and green bell pepper. Blue cheese dressing and tartar sauce came in identical plastic tubs and, surprisingly, were almost impossible to tell apart. Go figure.

With McMillen and Cuff in the kitchen and the evocative setting of its historic building, the Windsor would be slammed nightly if it were on Frankfort Avenue or Bardstown Road. Kentuckians, don’t let bridge-phobia keep you out of Southern Indiana. This one’s well worth the trip to New Albany.