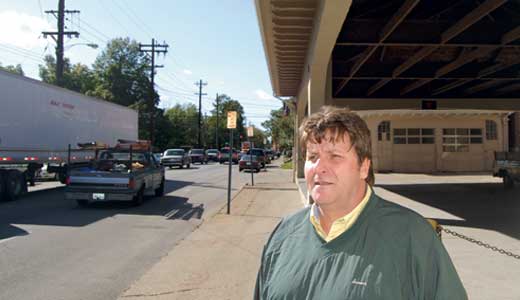 For the past 10 years, Greg Handy has leased a commercial property his family owns in Old Louisville to local artists who either don’t make the cut for the St. James Court Art Show, or are unwilling to pay the exorbitant cost to rent a booth.

The property — a former gas station — includes a 5000-square-foot concrete lot at the corner of Third and Hill streets. Located just one block from the annual art fair, it is prime real estate for artists wanting to get in on the action without officially signing up or shelling out the minimum $450 to participate.

For the Handy family and the artists they have long catered to, it’s been an ideal scenario.

About two weeks ago, however, he learned his family would no longer be allowed to rent their property to vendors during the art fair due to an ordinance enacted earlier this year.

Passed unanimously by the Metro Council in May, the so-called peddler ordinance prohibits vendors from setting up within 100 feet of a Metro Louisville special permitted event like the St. James Court Art Show, which is centered in the historic Old Louisville neighborhood. In addition to eliminating illegal “squatter” vendors who were selling art and other goods without a permit — sometimes blocking sidewalks and parking lots in the process — the city bill has highlighted tensions between St. James organizers and local artists who have long benefited from being on the show’s peripheries without actually participating in the event.

And although Handy will no longer be able to profit from vendors setting up shop on his private land, he is more upset about the impact on nonprofit groups like the Boy Scouts, which often hold fundraisers on surrounding properties during the annual festival.

“Old Louisville has prided itself on its inclusiveness, and this law is based on exclusion,” Handy says. “This is based on greed and money.”

Now, vendors who want to sell their wares without officially entering the art fair will have to get permission from event organizers before setting up within 100 feet, although critics of the ordinance are skeptical any such exceptions will be granted. Those found violating the law could face up to a $500 fine.

St. James Court Art Show director Margue Esrock says organizers are in negotiations with some neighborhood groups to possibly provide a waiver, though she would not provide specifics.

“It takes a lot of operating expense to put on a quality show,” she says, “and I really hope more people will apply and will go through the process now.”

Established in 1957 to bring residents together and raise funds for needed neighborhood improvements, the annual St. James Court Art Show is now one of the largest juried art exhibits in the country. Organized by a consortium of five nonprofit neighborhood associations and the West End Baptist Church, the street festival features everything from reasonably priced handcrafted jewelry and quirky yard art to $20,000 bronze sculptures.

The outdoor arts and crafts museum spans several blocks and typically attracts more than a quarter-million pedestrians over three days. As the art show’s popularity has exploded over the years, an increasing number of opportunistic merchants have tried to operate near the site.

And although lawmakers say the peddler ordinance was not drafted specifically for Old Louisville’s mega art show, St. James organizers suggest the law will help maintain the show’s reputation and financial solvency.

“The people who are setting up outside without having paid into the art show, basically they are not helping to preserve this neighborhood,” Esrock says, adding that all profits from booth rentals go to neighborhood maintenance, community social services and scholarships for art students.

Artists interested in participating in the art show must first pay a one-time $30 application fee each year. At that point, a five-person panel judges the person’s work; an artist’s application is rejected or included from the show based upon that final score.

If an artist is accepted and chooses to participate, the minimum cost to rent a booth is $450, with booths in prime locations costing even more. There are about 700 artist booths at the fair, meaning the event rakes in a bare minimum of $315,000 annually.

Paul Harshaw, founder of the Unfair, a grassroots alternative art fair that welcomes all artists without fees and operates at the nearby Magnolia Bar, believes the ordinance represents another step in the wrong direction.

“The St. James Art Fair has always had side venues of some sort with weird people showing whatever art they could do. A person really talented, but who doesn’t fit the mold,” he says. “It made it more of a fun event and a circus. It sounds to me they just want to take the circus out because they can’t control it.”

Supporters of the ordinance, however, contend it is paramount that they attract quality artists the public views as “legitimate” in order to uphold the event’s reputation. Doing that means they must require whoever is pitching a tent and selling goods to pitch in a dollar — or several hundred, rather.

As for whether event organizers will actually grant any waivers allowing nearby property owners to let artists and other groups sell goods on their land, so far there’s been no indication any exceptions have been made.

The Handy family requested such a wavier, but Greg Handy says it was denied. In response, he asked for his property at Third and Hill to be included in the official event, with proceeds from booth rentals at the site going to the nonprofits of his choice. After a few rounds of negotiations, St. James officials agreed to his conditions, meaning his property will be used as part of the official art show.

And while Handy acknowledges the ordinance has only moderately impacted his family, he says, “It does hurt those needy associations and groups outside the (St. James) consortium. That is the only thing we’re concerned about.”