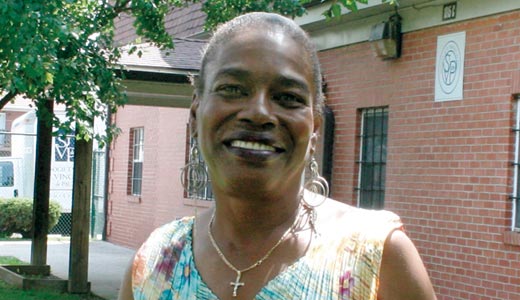 Morris Bangura fled his home in Sierra Leone when rebel forces ambushed his farming village and killed his parents in 1994. After spending years in a refugee camp, Bangura immigrated to the United States earlier this year, ending up in Louisville with the help of Catholic Charities.

Sitting outside a Starbucks, he tells of the devastation he faced in war-torn Africa. As he speaks, a group of hairstylists from a local salon cheerfully prance down Baxter Avenue, holding signs offering “free hugs” as part of a promotional effort. An attractive brunette leans down and hugs the 29-year-old as he bashfully covers his face and laughs.

Bangura loves America, even though he’s had a difficult time making ends meet since his arrival. Although he landed a job bussing tables at a downtown hotel, he soon was forced to quit when the physical strain of the fast-paced duties damaged his leg braces. As an infant Bangura was stricken with polio, a disease that has hindered his ability to walk ever since.

Just six months ago, Bangura was unemployed, hungry and desperate for aid when he boarded a TARC bus outside his Douglass Park apartment with no particular destination in mind. He traveled aimlessly along Bardstown Road, contemplating his options. Upon passing St. Raphael Catholic Church, Bangura says he felt inexplicably compelled to seek assistance there. It was at the church that he met someone who referred him to Mike Lutes, president of the St. Vincent de Paul Conference. The two met and Lutes was eager to assist, first by arranging for St. Vincent de Paul to help Bangura pay overdue bills for his utilities, which he was close to losing.

For Bangura and thousands of other struggling Louisvillians, St. Vincent de Paul — long thought of as merely a homeless shelter — has provided an array of services that reach far beyond temporary lodging. The nonprofit helps the working poor avoid homelessness, and serves tens of thousands of meals annually to those struggling financially. Among those who sought services last year, 19 percent were working full-time jobs, according to St. Vincent’s annual statistics. In addition, the charity offers career counseling, as well as on-campus programs for addicts and the mentally ill.

“I’m so grateful,” says Bangura. “In Africa, all hope of life is gone. There’s no hope in the future. But now I have hope.”

Ambitious and articulate, Bangura plans to attend Jefferson Community and Technical College in the spring semester to pursue a career in design and architecture. St. Vincent de Paul helped him qualify for disability benefits so he could be fitted for a new leg brace, and helped him scrape together enough money to buy a car. Now with independent transportation, he hopes to find a part-time job in an office atmosphere, where his disability will not be a problem.

More than 800 volunteers are working to meet the varied needs of those seeking help from St. Vincent de Paul. For example, if someone needs transportation to a doctor’s appointment or something urgent, a TARC pass is issued. If a person is behind on rent, volunteers might negotiate with the landlord to help avoid eviction.

Due to the tough economic climate, the need for such services is on the rise, according to Maryann Graves, who has been volunteering with St. Vincent de Paul for 20 years. During difficult economic times, many people aren’t just living paycheck to paycheck, she says, but instead they’re forced to live day by day. Often simple costs like sending a child back to school or recovering from an illness throw the family into a financial tailspin, Graves says.

“Everybody has a rough time in their lives,” she says. “You just have to do the best you can do.”

Although the 156-year-old Louisville charity is serving its largest-ever contingent of non-homeless clients, a rising number of homeless individuals also are seeking help at the nonprofit’s recently expanded Smoketown campus, which includes six housing complexes. A massive playground sits outside the de Paul Apartments, home to 12 single women with children. The Ozanam Inn houses 89 men — some for only one night and some for extended periods. Roberts Hall offers 24 private rooms for single, adult women. The Tranquil House apartments house 13 mentally ill adults on a permanent basis. Simon Hall is another permanent housing facility, which is home to 10 chronically homeless men.

“A lot more families with minimum-wage or low-paying jobs have found themselves in this situation,” says Linda Romine, public relations coordinator for the organization. “Some people who are couch-surfing don’t even realize they’re homeless.”

All the residents staying with St. Vincent de Paul on a permanent or transitional basis receive case management assistance to attain important skills and gain as much independence as possible. Some of the residents pursue their GEDs and forms of higher education, and most maintain steady jobs along with their chores and responsibilities at the facility.

Ruby Taylor, 60, weighed only 90 pounds when she entered the program at St. Jude, her frail body ravaged from a lifetime of alcohol and drug addiction. Her sister Lora completed the program in 2008 and urged her to begin treatment.

Born into a family of destitute sharecroppers in rural Tennessee, Taylor was deprived of a conventional childhood and instead took on vast responsibilities at an early age. Taylor picked cotton in the hot sun and tried desperately to meet a daily quota of 200 pounds of the crop.

After her mother left, Taylor cared for her 11 brothers and sisters. She began sneaking sips of her alcoholic father’s moonshine and homebrew. Soon those sips became a regular habit and Taylor was feeding an addiction. She dabbled with drugs and struggled with an alcohol addiction most of her adult life.

It is difficult to picture Taylor in such a state as she now sits behind the front desk at the recovery house on St. Vincent de Paul’s campus. After celebrating a year of sobriety, she volunteers with the center that helped her end a long cycle of addiction. She smiles warmly and is benevolent — fitting of a devoted grandmother.

With the help of St. Vincent’s follow-up program — which helps former clients transition to independent living — Ruby now lives in her own apartment and has mended relationships with her adult children and family. Mentally and physically the healthiest she’s been in her life, she hopes to continue to volunteer and help others gain self-sufficiency.

“I’m so blessed,” she says. “I don’t have that craving anymore.”

FRIENDS OF THE POOR WALK

For more information or to register

St. Vincent de Paul will hold its second annual Friends of the Poor Walk fundraiser Saturday, Sept. 26. There is no registration fee for the 3-mile walk, but pledges are required to participate. The money raised will support the many services provided by the nonprofit, including six housing programs and the Open Hand Kitchen, as well as rent, utility and food assistance programs throughout the Louisville area. —FJ