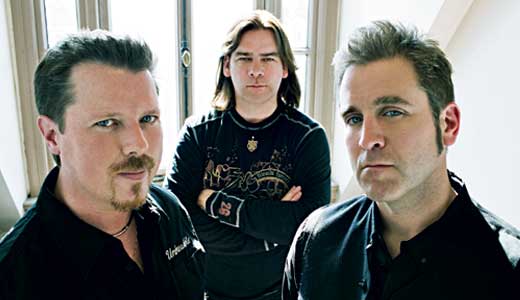 You don’t live that far away.

Far away is St. John’s, a city of 250,000 people in Newfoundland, Canada, an island sectioned off from North America both geographically and, in a sense, culturally.

If you grow up there, as Great Big Sea lead singer Alan Doyle did, you learn fishing, seafaring and the sailor hymns that accompany the island. You learn the Atlantic as body of water, and as continuous, undulating muse.

“If you’re a songwriter, and you grow up by the sea, it’s hard not to write songs about the sea. You’re kind of drawn to it,” Doyle says by phone. “We’re from a seafaring place — the romance that kind of defines you’re songwriting life: the ocean and the fishermen and the coming and going and the losses and triumphs at sea.”

Doyle grew up in Petty Harbor, 30 kilometers south of St. John’s. His parents were semi-professional musicians — Mom played organ in the church choir, Dad in an Irish pub band.

Doyle’s childhood was filled with traditional songs and singing. Much of Newfoundland’s history is passed down through generations via song, burrowing their way into his DNA. “It’s like when did you learn to sing ‘Happy Birthday.’ You didn’t. You just always knew it. It comes with the birth certificate.”

Great Big Sea coalesced out of a group of 40 or 50 musicians gigging in the St. John’s pub scene. Bob Hallett, Sean McCann and Doyle were the diehards. Touring was a logistical nightmare: Halifax, the next closest mainland city, is a 20-hour drive and eight-hour ferry ride. “We had to present ourselves from day one as an ambitious lot,” Doyle says.

Touring the United States earned them the attention of Sire Records’ impresario Seymour Stein, by now legendary for signing Talking Heads and Madonna. The group’s combination of a cappella arrangements mixed with modern influences makes for an intriguing set. “We might be the only band where you see two accordions playing at the same time,” Doyle says.

LEO: Contra or Super Mario?
RB: I’d rather play outside.