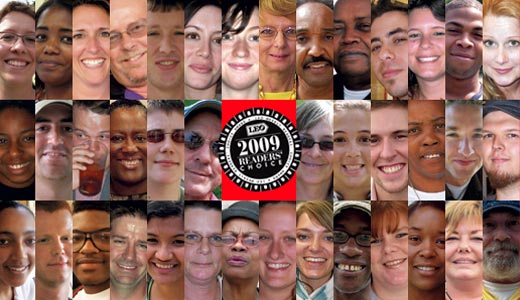 Welcome to another Readers’ Choice issue. It’s good to see you here again.

In the following pages you’ll find the customary list of winners of a variety of categories, as chosen by you. Congratulations to the prize-holders. We have the best readers in the universe, and they chose you, so consider yourself The Chosen.

As well, we hit the streets to talk to more than just the thousands who responded to our annual survey of what’s good and great in this town. We had one question. It’s open-ended, and from the looks of your responses, you took that to heart.

What is something good you can say about where you are right now?

“I still love the west because this is where I’m from. People are always out and you can still find me down there from time to time trading war stories. I live in Middletown now. And for the most part it’s pretty quiet, old and white, in the words of our mayor, but it’s all right and good for my little one.”

Spotted outside the Southend Medical Center

Spotted at the Apple Store in Oxmoor Mall

“It’s peaceful here in Kentucky, beautiful. Louisville has the feel of a big city but not the drama.”

Spotted sitting on a stoop on Webster Street

“This place is going to hell in a hand basket. I’ve lived here 29 years and it’s beautiful and we have some good neighbors, but they just got to get something more going on here.”

“I like that in school, I’ve found a time where I’m starting to figure out what to do for the rest of my life, where I’m headed, and how to get there.”

Spotted on a swing by the playground at Waterfront Park

“Sitting here with my beautiful wife, Susan, and enjoying the view of the city. We actually were just talking about buying a place on East Market Street so we can do this all the time.”

Spotted on a swing by the playground at Waterfront Park

“There’s really something for everyone at Waterfront Park. It’s getting better all the time.”

“This is my first time out here. I moved from the West End. I was tired of all the drama.”

Spotted at The Puritan, where he lives in Old Louisville

“They do a lot for the old folks.”

“I grew up here. It’s nice. Around here you know people very well and it’s tight knit. I’m happy with knowing them for so long, and it’s quiet on this end.”

“Everybody’s easygoing in this area. It’s more quiet than anywhere else.”

Spotted peddling sweets behind the counter of Plehn’s Bakery in St. Matthews

“I love this place … the people … my bosses — I love my job. I love my customers. It’s a classy neighborhood.”

Spotted at the Old Louisville Chamber of Commerce

“The excitement here is contagious, with all of the events that go on throughout the year. The locally owned restaurants and businesses have their flair of individuality.”

“I love the people. A girl sat on the bus beside me the other day, and she was from Pakistan. I’m from a small town, and I love that I can walk down the street and see any type of person.

“I love St. Matthews and I love being in the heart of it. There’s lots of life here — lots of local shops and businesses.”

“I’ve never been a server, and now I’ve learned to be very professional and hospitable. This area has come a long way, and we’ve come a long way as a restaurant.”

“It’s a new beginning, and people have hope and positive attitudes.” (The Trading Post has just reopened under new ownership.)

Spotted at 18th & Muhammad Ali Boulevard, at Expressions of You Coffeehouse

“I love my customers. They’re from all over the city.”

Spotted behind the counter at ear X-tacy, recommending the latest Muse album

“Actually, my favorite part of town is Germantown, but I love working here. This is a dream job for me — I’ve been preparing to work here since I was 10.”

“The Park DuValle community has changed significantly. It’s a stronger and safer one to live in. You can’t tell which homes are subsidized and which ones are not. It’s beautiful.”

Spotted outside the Southend Medical Center

“I didn’t have to sit in the doctor’s office very long.”

“A lot of agencies are here trying to uplift and elevate the economics here. There are several groups like that, including the Louisville Urban League and Justice Resource Center, working towards improving this area.”

“It’s quiet here. It’s a nice place. I’m from Israel, and people are so friendly and polite here. But I’ve noticed one thing — teenagers need to respect their parents more. They don’t seem to care about their futures here.”

“I grew up here, and my mama did, too. I had a great relationship with my neighbors. My part of the street was peaceful for the most part. Where I live now is a dramatic change from what I once knew, but very welcoming for the change that I’m trying to make in my personal life. I mean, don’t get me wrong: The West End has a lot to offer and it is what you make it, but sometimes you get caught in the mix before you realize what’s going on.”

Spotted taking a lunch break at an outdoor table near Carmichael’s on Frankfort Avenue, his UPS truck parked nearby

Spotted at the Shively Fire Department

“I love the Iroquois Park area because it’s a real tight-knit community.”

Spotted at the Shively-Newman Library

“The events around here — the concerts and all that. They always have something going on here.”

“I like that in school, I’ve found a time where I’m starting to figure out what to do for the rest of my life, where I’m headed, and how to get there.”

Spotted at the Iroquois Golf Club

“The beer here is a fair price. It’s better than Highlands prices.”

“We have kids here that we tutor. I volunteer with the L.I.F.E. Institute and it’s about helping others. I know because they help me, too.”

Spotted at the Iroquois Golf Club

“This area reminds me of Europe — pedestrian walkways with small cafés. It’s definitely an eclectic part of the city.”

“It’s a nice, safe place to live, and I don’t have to pay utilities.”

Spotted on a bench overlooking the Great Lawn at Waterfront Park

“Right here is beautiful. The view is lovely. I have lovely company sitting here talking to me … It’s a fairly peaceful place to meditate and think about the future.”

Spotted inside Miss Cs’ Kitchen and Pantry on Story Avenue

“Butchertown is a beautiful neighborhood. The architecture and the people are wonderful, and we have the best neighborhood association … Swift (meatpacking company) is the only negative.”

“There’s some great potential around here for commercial business really. I mean, it is so close to downtown, it makes it easier for folks to get around to the waterfront and everything else.”

Spotted at the Shively-Newman Library

“It’s all about the re-gentrification of Louisville here. It’s a fun part of the city where there’s always something new and there’s a real focus on local goods.”

Spotted at the corner of East Burnett and Hickory Street

“This is the first time I’ve been this far into Germantown … I’d come here again.”

Spotted at Shively City Hall, where she works

“I am probably in the best place I’ve been in my whole life. This is the perfect job for me — it’s a great place to work.”

“It’s challenging. I’m hoping to get into a good university.”

“I call this area the ‘Upscale Highlands.’ I love the people around me.”

“I grew up in this part of Butchertown and I’ve always liked it, except for the pig smell … There’s a lot of history in this area and it has a lot of potential.”

Spotted preparing an espresso at Day’s Coffee in the Highlands

"It’s a pretty idiosyncratic place to live. It has the vestiges of a neighborhood — I can get away with not using a car. And I love how everybody has the same idea of what a front yard should be — lush and overgrown. That, with the older buildings and houses, adds to the charm of this place.”

Spotted at BBC in St. Matthews

“I like that you can walk to a lot of places and park your car in one.”

“I love the culture — being able to walk around and see people my age — people of all ages, really. And there’s great food here in the Highlands. You can’t beat it.”

"I come here for the pretzels and beer cheese. That’s why I’m here.”