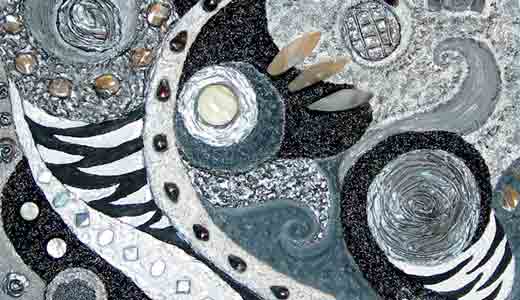 Kathleen Fitzgerald came into the art game a little later than most. After working more than 20 years in the nursing field, she decided to try out a hobby she’d been curious about her entire life. “I was afraid to make that first brush stroke,” she says about her initial foray into painting. That was two years ago. Fitzgerald now has more than a dozen of her mixed-media paintings hanging at the Douglass Loop Heine Bros. and has sold several pieces around town, at various silent auctions and such. “My goal is to have fun, keep it a hobby,” she says.

Fitzgerald’s work ranges from colorful images of people and horses, to more abstract experiments with shapes, colors, even beads and found objects. “I would describe my work as optimistic and whimsical,” she says. “At the same time, it is often complex and dimensional.”