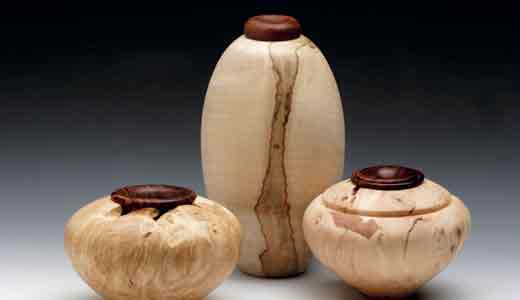 Standing in a pile of sawdust and shavings that is roughly the size of a batter’s box, Andrew Brown inserts a long, rectangular spear of poplar into a lathe in his Germantown garage. The woodturner from Atlanta, Ga., is in the middle of a bout of copy spindlework; he is making replicas for a high-end remodel job someone’s doing down south of here.

After some post-collegiate banging around in the restaurant industry, he took a stopgap gig in the shipping department of a woodworking shop in Atlanta. As is wont to happen, Brown became interested in his environs, and — bam bam bam — he had a lathe, a teacher and sharpening skills. Brown arrived here six years ago an accomplished woodturner.

His work is functional; around his kitchen you’ll find his bowls and a salt-and-pepper-mill set. While some of his work bends toward the artistic, he’s most content either teaching or working something repetitive on the lathe. “There’s not enough P.T. Barnum in me to be a successful gallery artist,” he says.