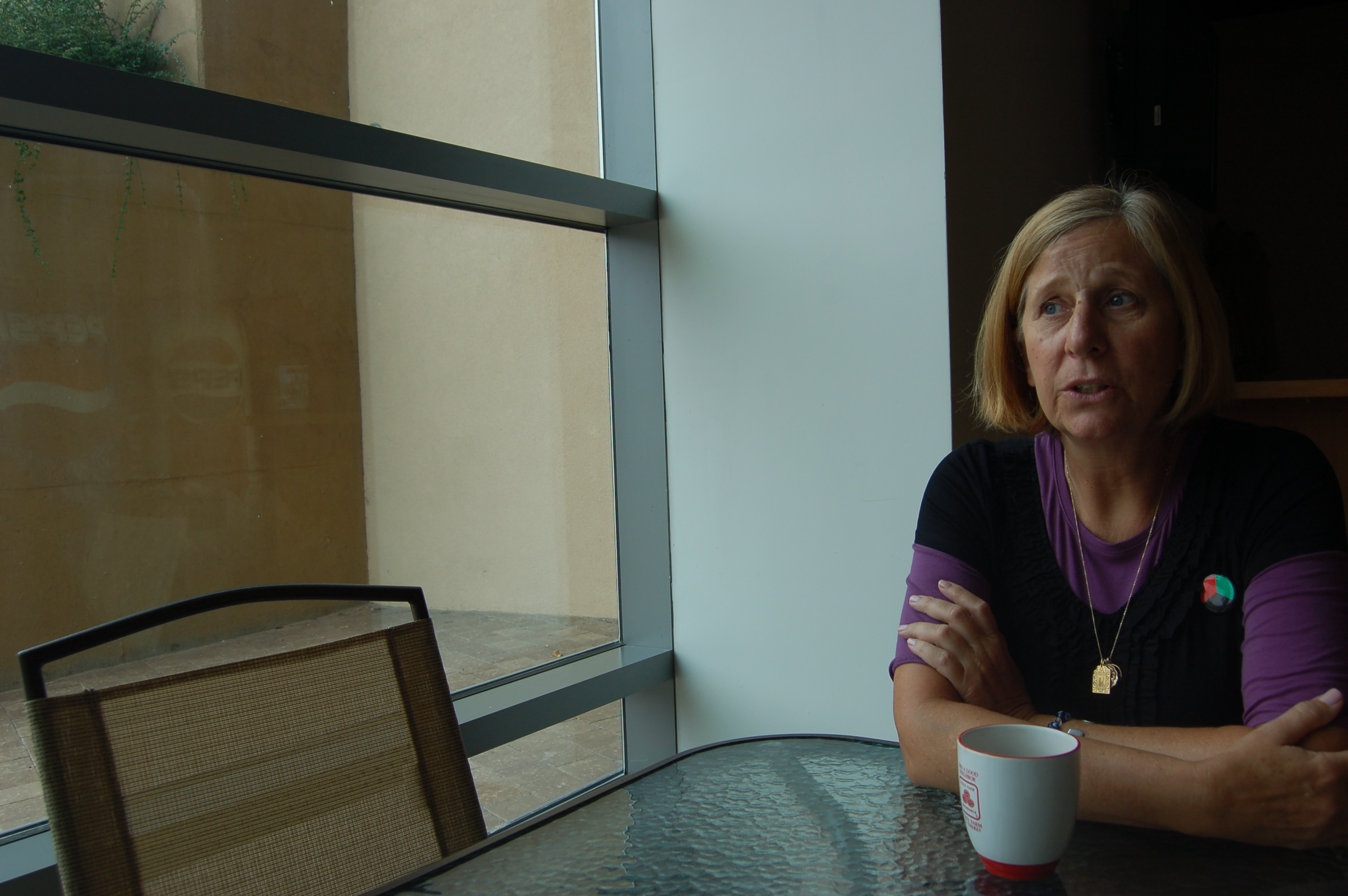 While touring the Muhammad Ali Center, peace activist Cindy Sheehan watched an introductory film about he former heavyweight champion that highlighted his refusal to be inducted into the military during the height of the Vietnam War. The sacrifice cost Ali more than just his best years in boxing, he was also ridiculed and criticized to the point of being one of the most hated men in America. Applauding throughout the presentation, it’s something Sheehan can certainly relate to as the most prominent anti-war activist in the country during the Bush-era.

The mother of U.S. Army Specialist Casey Sheehan, who was killed in Iraq in 2004, gained international notoriety after for protesting President Bush from a makeshift camp outside his Texas ranch.

Since then Sheehan has been the face of the anti-war movement, even after Democrats took control of Washington. In August, she traveled to Martha’s Vineyard where President Barack Obama was vacationing and held several peace vigils to protest the continuing wars.

“It was different back in Crawford, Texas — George Bush was responsible for killing my son,” she says. “I want another mother whose son has been killed since Obama has been president to request a meeting. What is the noble cause that we’re still there for and why are people still dying? Demand a meeting and ask these questions that haven’t been satisfactorily answered.”

Sheehan will be in Louisville for the rest of the week making several speeches as part of her national book tour. She sat down with LEO Weekly to talk about the anti-war movement, Obama’s war policies and the ongoing conflicts in Iraq and Afghanistan:

LEO: Tell us a little about your new book, “Myth America.” What is it all about?

CS: It’s about the class division in this country and how we can’t have healthy communities or healthy families until we realize it is a class division. And we need to work together to undermine what I call the robber class. I published it in April as a booklet and so it was only 100 pages long. And I realized after going to 36 cities in four months and interacting with people all over the country that I barely scratched the surface of the subject. Now I’m expanding it. I would have been finished with it by today, but last week I got put off course by going to Martha’s Vineyard to protest the wars.

LEO: What are your thoughts about President Obama’s direction and position in Iraq and Afghanistan at this point?

CS: The only change we’ve seen in those policies has been for the worse. Obama was elected as a change agent. I didn’t vote for him, but people who did I think voted for him did to make this country better and change the policies of the Bush administration in a positive direction, not a negative direction. I’m not satisfied at all. That’s why I went to Martha’s Vineyard, just to show the consistency and maybe reinvigorate or spark more anti-war sentiment in this country no matter who is president.

LEO: Do you think the anti-war movement has lost energy?

CS: The movement started to lose steam in 2006 when the Democrats regained control of both houses of Congress. Unfortunately, the election of Barack Obama practically killed the anti-war movement. It’s not dead. We’re still out there. People in Louisville are still working, but we’re not going to be able to affect any type of change until we have a mass movement.

LEO: One of the first things President Obama did was increase the troop levels in Afghanistan, but poll numbers show the American people are against the war …

LEO: Even (conservative columnist) George Will came out against the war recently …

CS: That’s purely political. I don’t trust George Will. I don’t want to be on George Will’s side about anything, but we’re on the same side for a different reason that’s for sure. I’ve always been on this side.

LEO: But doesn’t that show a certain consensus has been reached about this war?

CS: I think so. I think 57 percent is an overwhelming majority of people who think it’s not worth fighting. That was the recent CNN poll. Before I went to Martha’s Vineyard it was 51 percent. Now it’s 57. It’s a significant jump in 10 days. But we had that same thing with Iraq during the Bush administration. We have even high numbers against Iraq. The poll numbers to be effective have to be translated into activism to translate into change of policy, right? We don’t see 57 percent of Americans out on the street against the wars. We don’t see even .57 percent of people out. It’s what I’m trying to do — re-energize and spark something. I know it’s really hard because people are profoundly struggling these days economically. They feel so stratified socially. Even in the movement we’re struggling for resources even more than before. It’s never been a rich movement.

LEO: Are people, including activists, exhausted?

CS: I’ve only been doing it for five-and-a-half years since Casey was killed, but some have been involved in this if not for decades, certainly since 9/11. And people are just really, really tired, but I know the people of Iraq and Afghanistan are tired of being bombed, being occupied militarily. We have to be their spokespeople too.

LEO: But isn’t the war in Afghanistan a necessary war as opposed to the “dumb war” in Iraq?

CS: My take is 99 percent of wars are dumb. The only just war is one taken in self-defense and only as a very last resort or the last solution. I know the anti-war movement was very bad about defining that during the Bush administration. Public opinion was for Afghanistan, but we shouldn’t base our morals or principles on public opinions. There was no moral justification for the invasion of Afghanistan. Even if Osama bin Laden was hiding in Afghanistan, you don’t start bombing an entire country and killing innocent people. During the Obama administration they’re increasing troop levels and they’re keeping the same exact rhetoric from the Bush administration that it’s a war of necessity, there are people there who want to kill Americans and they’re doing it to keep us safe, which is utter nonsense. Many of the organizations in the anti-war movement supported and worked for and voted for and raised money for Obama, even though he said all along that he was going to increase troop levels in Afghanistan and Pakistan. The policies in those tribal regions are disastrous. Not only are thousands dead, but millions have had to flee their homes to go into refugee camps that were already straining at the seams. It’s a humanitarian disaster. But these anti-war groups supported Obama, even though he was saying things contradictory to anti-war principles, and now as it’s getting worse they suddenly go, “Hey, wait a minute.”

LEO: When you ran for Congress in 2008 and challenged House Speaker Nancy Pelosi, what was the response?

CS: Very good from the far left, but liberals, it was more like, you should be challenging a Republican. And I would ask why, when her policies are almost exactly the same as Republicans. We have to get out of that Democrat-Republican paradigm, especially in federal politics. They’re very similar to each other. What my friend Ralph Nader calls — there’s only a dime’s worth of different between Democrats and Republicans federally. On our level there’s a huge difference, but it doesn’t translate to the “robber class” politicians.

LEO: How troubled are you by the continued relationship between the U.S. government and Blackwater, which is now known as Xe Services?

CS: It’s another way to depersonalize war for everybody in this country. If there’s not a forced conscription anymore, so then people say, “Your son volunteered, he deserved to be misused by his government.” But when you bring in paid mercenaries who make the same amount in one day as our soldiers make in a month, then people care even less about them killing or committing war crimes. It’s troubling they don’t have to adhere to any rules of engagement. They’re in prisons torturing people and sometimes in authority positions over our own soldiers. The Blackwater or Xe company founder, Eric Prince, is just a scoundrel. I’m not saying they’re all corrupt or violent or evil murderers, but look, they’ve been accused of raping women and shooting people for sport to test bullets.

LEO: In its war coverage has the media dropped the ball on this organization?

CS: If they’re mentioned at all … they call them contractors, like they’re over there building something instead of indiscriminately killing Iraqis. Of course, there’s not even mainstream media attention on what the mercenaries really entail and who they really are and what they really are. Jeremy Scahill did a brilliant book called “Blackwater” about that very issue, which has gotten a lot of attention in the progressive, anti-war atmosphere, but in the mainstream I’m not sure people even know what’s going on.

LEO: American forces turned over security in urban centers to the Iraqis more than a month ago. Do you expect a full pullout from Iraq will happen? Do you expect residual U.S. forces will be left behind?

CS: Obama has already promised that we’ll keep some troops and bases there … (Obama) promised one combat brigade a month and we really haven’t seen one troop come out. The withdrawal from the cities that was mandated in June, they just withdrew the boundaries of the cities to put the bases outside the cities. So no, I’m not satisfied at all with the lack of progress in getting our troops back from Iraq.

LEO: What advice do you have for other grassroots activists still in the anti-war movement?

CS: It’s all about the policies. It’s not about the person who is in power… I’m here in a center of a person who challenged the military industrial complex 40 years ago and he refused to be a part of it. Muhammad Ali refused to be a part. And that was when a Democrat was president. This Democrat-to-Republican shift, we see the same pattern repeating itself every four to eight years … I think that’s designed to keep at least half the people in this country bought or co-opted by the system. The same people who for eight years loved to hate George W. Bush aren’t so much against his policies anymore. It’s the same policies. That’s what we have to realize.

LEO: Do you expect Obama will support a “surge” in Afghanistan as Bush initiated in Iraq?

LEO: What’s ahead for you in the anti-war movement?

CS: We have several events coming up. The G-20 protest in Pittsburgh from Sept. 24–25, which is about the bigger economies getting together to enrich themselves and impoverish us even more. Then Oct. 5 out in front of the White House about the war, which is being led by (the group) Witness Against Torture. All of this stuff is connected … Right now I’m working on the International People’s Declaration of Peace and it’s a grassroots movement for people in the world to join and resist the institutional violence of our governments. I’m hoping to take that all over the world. I have three out-of-the-country trips planned before the end of the year in Sweden, Cuba and Gaza. I’m hoping to start that and have people all over the world sign it. The only thing that’s going to stop war is if we, people, refuse to participate in it anymore.