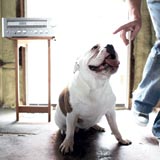 End-of-summer music must have attitude. May is for poppy beats and shallow messages to make your hips swing easier and you drink more beer. August is about thought-provoking, harmonic intercourse that politely tugs on your soul. It’s about getting yourself back together after endless summer nights of cookouts and debauchery. Operation Radio Wave, the album by Marion Square guitarist Brian Goodwin, is my escort out of heat, internships and bikinis and into fall, football and scholarship.

Cohesion is admirable but sometimes overrated: Each of Goodwin’s songs stands on its own. The album evokes The Dead so frequently, I can almost hear Jerry Garcia tapping his fingers. With a tiny pinch of Clapton, Morrison and War — and rare shades of The Hives — Goodwin’s solo outing is suggestive, moody and genuine.