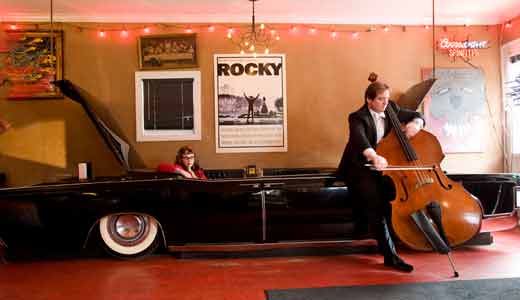 From beneath a mop of dark blond hair and behind a seemingly constant grin, Richard Ryan seems approachable and unruffled. But given a bass, his calm facial expression turns to glare. His eyebrows furrow, his lips tighten, and he moves the bow across the strings almost violently. It’s clear he means business.

Ryan has 12 years of bass experience. Hailing from Phoenix, Ariz., he received his degree in musical performance from Indiana University. He joined the Louisville Orchestra in January of 2008 as assistant principal bass player. At 22, he is the youngest member of the orchestra. Once an avid youth orchestra member throughout middle and high school, he now conducts future potential performers in the Louisville Youth Orchestra.

Richard Ryan: Louisville is a great place. It’s not what I expected. There’s a really young, cool vibe. It’s a really culturally diverse place. You know, some people expect something like banjos from “Deliverance.” I’m glad I came here.

LEO: Aside from classical, what other types of music do you like?

RR: All different kinds. My favorite band is the Smashing Pumpkins. I can like and appreciate all kinds. Crappy rock sucks. Crappy hip-hop sucks. Great hip-hop is really cool. I just went to Lollapalooza and four or five bands had violinists, some even had cellists.

LEO: With the BB&T Strings Attached series, the Louisville Orchestra has played with Ben Folds and will feature Dashboard Confessional in November. How do you think the series changes the way people see classical music?

RR: The Ben Folds fans who appreciate his music could also appreciate the Orchestra’s music. The idea of combining performers is natural. Performance is universal. I get excited when I see performers on stage. I don’t know how long it will take for symphony orchestras to play with hip-hop acts, but hopefully not too long.

LEO: What have you accomplished that has made you the proudest?

RR: At this point, I’m just really psyched to be doing what I’ve always wanted to be doing. I conducted a youth orchestra, and I’m really surprised and happy to be doing that — to spread performing to young kids. I’ve done that as a kid, and now I’ve come full circle. Teaching kids is important if we want future music appreciators in the audience. Performing changes your opinions of music. You can hear things you didn’t hear before.

LEO: What advice would you give to a young musician?

RR: Work hard. Get all the information you can. Just do the best you can. Practice. It’d be easier if you could just sell your soul, but it doesn’t work that way.

LEO: Why do you love classical music?

RR: Music is the most dynamic art form. Classical music at its core is not for the academic or the high society — it’s for everyone. The more people who can enjoy it, the better. I’ve always had a strong, emotional connection to music. I love performing — especially at the end of the concert, when you feel like you did a good job. Music is especially emotional for a lot of people. The music people hate, they really hate. The music people love, they really love.

Devonie Freeman plays the violin;
it doesn’t play her

Devonie Freeman rests the violin on her shoulder gently and moves the bow across the strings with grace and precision. Although she’s done this countless times in her 58 years, she still carefully handles her instrument — cautiously aware of the power it can wield.

Born in Eastern Kentucky, Freeman started playing fiddle when she was 8, after her teacher sent a letter home regarding her musical talent. She attended the University of Cincinnati and Juilliard — one of the world’s most prestigious and competitive performing arts schools.

After graduation, she taught public school in New York City and played in several renowned orchestras, including the American Symphony Orchestra and the St. Louis Symphony. She also played Radio City Music Hall and the Aspen Music Festival. The director of the Aspen Music Festival, Jorge Mester, encouraged her to come to Louisville, where he was also music director of the Louisville Orchestra. Thirty-five years later, she seems quite comfortable playing second violin here.

LEO: What are some of your favorite memories during your time with the orchestra?

Devonie Freeman: We played the Kennedy Center concert hall. We had great reviews. Everyone from Louisville flew to New York to see the performance. It was spectacular. We also went on a state-sponsored trip to Mexico and performed. It was wonderful. People in foreign countries knew our music. People came to see us in person. They came to see the contemporary music.

LEO: What has changed about the orchestra over the years?

DF: We have a different audience when we do those wild performances (BB&T Strings Attached series). People see my violin case when I’m outside, come up and ask if I was in the show. I think it’s wonderful.

DF: Classical music mostly. But I listen to rock. I like Coldplay, The Cure, Macy Gray. I had never heard Ben Folds (when he played with the Louisville Orchestra last October), but I liked him.

LEO: How do you see the future of live orchestras?

DF: Well, you have to give what the city wants. I was thrilled with getting the kids involved in high schools. There’s only so much time you can spend in front of the computer and playing video games until you just go out and do it. They really enjoy it. As noisy as the kids are, as soon as the conductor comes out, there is silence. You can sense the electricity. If anyone questions what impact the Louisville Orchestra has on the community, they should see a performance.

LEO: What advice would you give to a young musician?

DF: If you have the desire to become a performer, keep practicing. You can do it. Keep going on auditions. You’ll make it.

LEO: What lesson have you learned in your career?

DF: I play the violin; it doesn’t play me. I’m a human being first.

LEO: Why do you love performing?

DF: I want to express the spiritual and emotional content to the listener. It nourishes my soul to do that.