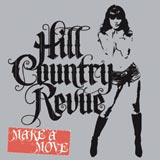 Hill Country Revue is a must-own for even the most casual of blues lovers. The band is more of a spin-off rather than a side project for Cody Dickinson and Chris Chew, two of the three founding members of the North Mississippi All-Stars collective. Their debut, Make A Move, shakes off the jam-band veneer, to which the All-Stars are accustomed, and launches a journey through America’s regional variations on a theme: including Delta blues, Texas blues and Chicago blues. Purists will argue that each region bears its own distinctive mark. Most of the record was written by Garry Burnside, son of late blues legend R.L. Burnside. The band’s eponymous track, “Hill Country Revue,” bounces with the swing of an old Mark Knopfler outtake, while their take on R.L.’s “Alice Mae” must be heard to be believed.