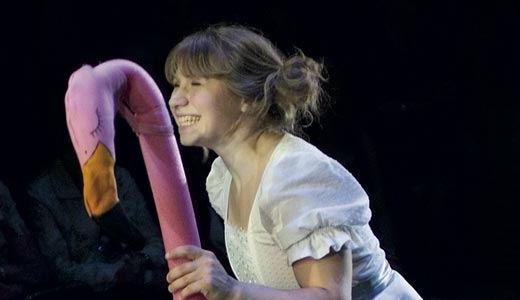 At first glance, the 46th season at Actors Theatre of Louisville looks like a series of safe bets. In hard times, savvy arts organizations pin their hopes on musicals, comedies and nostalgia meant to entice audiences short on money and eager for an evening of escape, and ATL’s fall lineup of familiar fare like “A Christmas Story” would seem no exception.

At first glance, a play based on Lewis Carroll’s “Alice’s Adventures in Wonderland” and “Through the Looking Glass” — children’s classics that are both weird and funny enough to appeal to adults — looks like the safest of bets, an all-ages show designed to please everyone without raising any eyebrows.

Chicago’s Lookingglass Theatre’s production of “Lookingglass Alice” is a rare treat — an avante garde restaging of a beloved classic that succeeds beyond imagination. Writer/director David Catlin, in collaboration with the Lookingglass Company and the Actors Gymnasium, took Alice’s journey from lowly pawn to adult queen and weaved in Carroll’s best-loved characters from both of his books. The result is poignant and surprising, a boundary-pushing, crowd-pleasing ride built on dazzling physicality and a sharp wit.

Alice (Lindsey Noel Whiting) finds herself in a more sophisticated Wonderland this time around, populated by a sexy and hip Cheshire Cat (the graceful Adeoye), gender-bending queens (Kevin Douglas and Mitchell Fain, both hilarious) and Tweedledee and Tweedledum’s ’80s-inspired Running Man dance-off. Balancing the wackiness of Alice’s off-kilter world is an unsettling undercurrent of burgeoning sexuality, as Alice teeters on the brink of her childhood innocence, reaching for an adult world she finds both frightening and alluring.

This is a physical production, with actors using movement, dance and acrobatics to create the dream-like, absurd mood of Carroll’s stories, which, in turn, mirrors the topsy-turvy internal life of an adolescent girl. The multi-talented cast mixes tumbling with unicycles, aerial silks and other circus accoutrements to an effect that is visually astonishing and textually appropriate, proving live theater can hold its own against CGI-enhanced films. Alice’s cloud swing act is a revelation, a stunning feat that perfectly expresses the thrills and perils of growing up.

Breaking down the traditional boundaries between audience and actor is a cornerstone of experimental theater, and in this production you may end up sitting on the stage — the reveal of the “other audience” as Alice climbs through the mirror is as dramatic for the folks in the seats as it was for Alice in the story. If you sit in the aisles or in the front row, you might entertain an errant actor on your lap. The line between backstage and on stage is also blurred — the audience hears stage cues, and the crew frequently joins the play’s action. Breaking the fourth wall can be dangerous, but here, it pulls the audience even deeper into the show.

That Actors Theatre took risks in presenting a familiar classic in such an experimental format with such wide appeal bodes well for this season. Expect to keep talking about this show long after you see it.