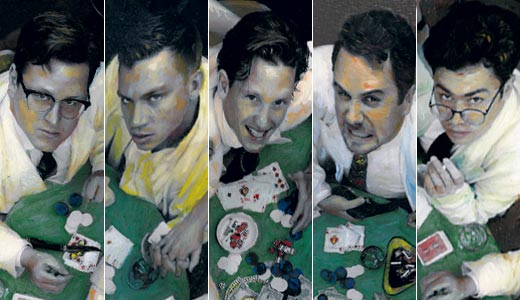 Get your swizzle sticks and dancing shoes out: Saturday night, Bistro 301, the cozy, eclectic East Market restaurant, will take on the passion and dazzle of a U.S.O. show. In efforts to continue to raise funds and awareness for Alleycat Advocates, cat- and music-loving entrepreneurs Matt and Molly Mershon are opening their doors to a rare visit from alt-school lounge ensemble Love Jones.

The proprietors of Bistro 301 are not only spreading the word on the feline population crisis, they’re also introducing new material from some of Louisville’s favorite sons. The precocious sour mashers will be performing songs from their first studio release in almost 15 years, tentatively titled The Lifestyle, with a late fall launch expected.

With Jonathan Palmer, Phil Gough and Ben Daugherty flying in from L.A. to join Louisville contingent Barry Thomas, Chris Hawpe and Scott Lankford, the evening will be predictably unpredictable, per the Love Jones psyche, in quite an intimate setting.

“We’re only selling 150 tickets,” Matt says, “so we’re encouraging people to make a night of it. Come for dinner and stay for the music.”

The resilient Alleycat Advocates have high hopes and high bills. The magnetic attraction of Love Jones made sense to the Mershons, who helped raise more than $6,000 for the spay-neuter and rescue program last year.

After tracking neighborhood cats on their own, Matt and Molly got involved with founder Karen Little, whose tireless mission is to reduce the overwhelming number of strays and unnecessary suffering and death.

“Karen is the glue,” he says, “the cat’s meow. She is an amazing woman who is completely devoted to this organization.”

It’s been a year since Love Jones last filled two blocks of the Baxter corridor during the Original Highlands Festival. They played the hits and test-drove “Take It Out and Touch It” to the heated asphalt and sky dancefloor.

Bassist and archivist Barry Thomas visits his friends via the Internet for most of the year. I’m curious what’s it like to be a bi-coastal band.

“We usually perform a few times a year, primarily in Louisville and L.A.,” Thomas says. “We’re really best friends, and it’s just a great excuse to see everyone and have some fun recording again.”

“We write catchy little songs that are very adaptable, portable,” he writes over e-mail. “The lyrics and the live presentation can get a little — or a lot — irreverent, but the core musical principles are very simple and direct. As far as our fans’ shelf-life, they are pickled in whiskey, so they will probably keep for many, many years.”

Our ear witness to this collection of songs is Kyle Meredith of WFPK’s “Daily Feed.” A late bloomer, he’s gotten a potent whiff of Love Jones’ sonic sweat.

“I came in somewhere around 2005,” he says. “It all sounded good. Like a great band biography you can’t set down. Of course, it wasn’t just the crazy antics and high energy of the live show — the music itself was special. You know the favorites: ‘Central Avenue,’ ‘I Like Young Girls,’ ‘Little Black Book.’ Supremely unique. Like mixing Frank and Dino with the Barenaked Ladies.”

Meredith will have the band on as guest DJs for the Friday ride home while he covers the slot for DJ Laura Shine.

“It’s fantastic!” he says. “‘Contact High’ and ‘Take It Out and Touch It’ showcase the group in all of their old tasteless, shameless glory,” Meredith says. “After all, it’s been nearly a decade and a half, so it’s about time for them to be cool again.” Love Jones also perform Sunday, Sept. 27, at the Monkey Wrench (1025 Barret Ave.).