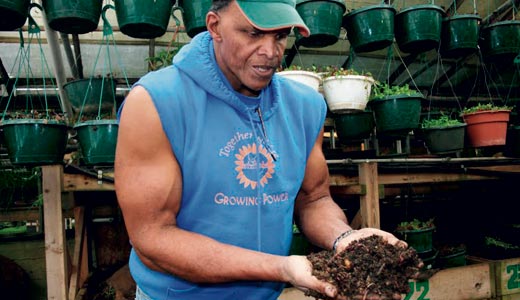 A Google images search for “farmer” yields pictures of white guys in vast fields, or leaning on tractors.

To Will Allen, the future of farming looks nothing like that. The founder and chief executive officer of the Wisconsin-based nonprofit Growing Power envisions millions of acres of vacant city lots, yards, parking lots and more, converted into plots that grow healthy, organic food. Growers of all ages, races and genders would tend them, profit from them and sustain their communities by them.

It’s a necessary change from the agribusiness focused on profits, which also works to the detriment of people and the planet. Through Growing Power, Allen teaches practical skills that allow urban and suburban communities across the nation to create and enjoy the benefits of hyper-local food systems. Innovations such as including small fish farms as part of inner-city greenhouses earned Allen a MacArthur Foundation “genius” grant last year, half a million dollars to simply continue doing intrepid work.

LEO caught up with him just before he dashed off to get his hands dirty in yet another post-industrial city on the economic edge: He will speak here next week as part of the IdeaFestival.

Will Allen: Not a tremendous amount of access. What I’m finding is a tremendous amount of excitement about the possibility of creating access. More and more people realize that the food system’s broken and access to good, healthy food is just not there. They’re more aware that the food they’re eating is not very nutritious; it doesn’t taste very good. It’s not good for their kids; it’s not good for anybody.

LEO: Is that part of what you mean when you talk about just and equitable food systems?

WA: It’s much deeper than that. We do about 70 things around the food system — from advocacy and policy stuff to, you know, growing a lot of food. The overriding piece for me personally is to make sure everybody has access to the same healthy food, regardless of their economic conditions, and that we dismantle racism that’s associated with food. In many food desert areas, there’s no major grocery store. As soon as those communities get gentrified, grocery stores move in. So there’s definitely racism.

LEO: Tell us a little bit about the history of urban food cultivation in this country.

WA: It’s nothing new. Many people, especially people of color who live in central cities, have always grown food. But now it’s become more of a mainstream thing to have these very visible kind of community gardens. What’s really spurred it on is the economic conditions. This year more people are growing gardens than ever, simply because of necessity.

Now we have corporations interested in gardens on their corporate campuses, buying local food. Again, access is not there because we have to ramp it up. So the challenge is, how do we grow food without soil?

WA: We teach people how to take food waste and carbon waste and turn it into high-nutrient compost. This year we’ll compost 24 million pounds, and that’s just a drop in the bucket. We need thousands of yards of new soil … to grow on top of asphalt, concrete, rooftops and in container gardens.

LEO: You’re talking about communities where cash and other resources are often in short supply, right?

WA: I’m talking about resources that are there, that sweat equity can turn into gold. For example, if you’re able to collect food waste to turn it into compost, all of a sudden you have a product that can be marketed.

LEO: You started off 15 years ago getting teens to renovate greenhouses and grow food. How can we get youth interested and active in food security today?

WA: It’s probably the easiest thing to do. When you drive a big truck up to a vacant lot and start unloading your tools and compost, kids run up and want to know what’s going on. That’s when you can engage them, and they become the keepers of the project. (If you chase them away, you’ve got trouble.) Then have a healthy meal with them; they tell their parents, and parents get involved. This has to be done in a multi-generational, multicultural way.

And our gardens must beautify the community. Once you become an asset to that local community, you become an asset to the city, so the politicos get involved. The best policy changes that we’ve been able to make are by having a concrete project to show them, (that) this is how we can change the dynamics of the community, engage young people, get them summer jobs, reduce crime — with a little investment.

LEO: Our city government has been fairly supportive of community gardens and promoting local food. What more should we be asking for?

WA: There’s a couple things the city can help you with. Of course policy changes. But, um, you want them to stay out of your way. Seriously. Stay out of our way and let us do our thing. Cities don’t have money, but they end up owning most of the vacant land (we can use).

LEO: What’s an example of a helpful policy change?

WA: Say every family can have up to four chickens. Or keep bees, which are more productive in cities than in areas where conventional farming has killed off the variety of flora. Grow fish inside vacant buildings, turning them into aquaponic systems. Nothing’s off limits.

LEO: What makes you excited about your work right now?

WA: Recently, what’s really exciting me is that 10 years ago, I would run across Latinos or African-Americans, and they didn’t want to get into farming. African-Americans would say, “That’s slaves’ work.” Today, people of color are jumping aboard the “good food revolution,” as they call it. That is very pleasing. The other piece is people college aged and younger who are very excited about getting into the food system. And the fact that schools are starting to institutionalize food systems. Corporations want to purchase local foods. Politicos are jumping on board. Everybody is.