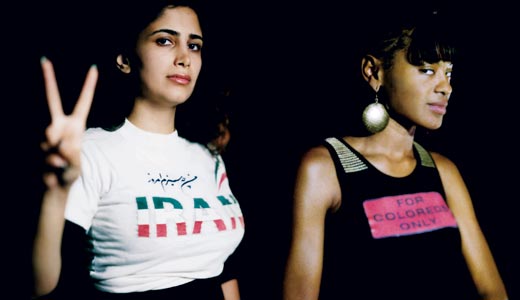 It is a billboard, a 30-second radio spot, that banner perched atop the home page of a website you hit every morning. It is the iced Starbucks drink that Nancy Botwin’s hand seems to have grown into on “Weeds.”

Whatever, advertising is among the most constant — save nourishment — of things all Americans share. The average citizen confronts more than 3,000 commercial messages every day, according to research conducted by the Union of Concerned Scientists.

So it is natural, given the radiative exposure, that we engage in this learned behavior via our own forms of advertising — albeit on a smaller scale.

Enter the T-shirt, a chest-width billboard that can move farther and wider than anything mechanized, a kind of viral personal marketing tool with the potential to convey almost instantly to those around you any message of your — or your favorite designer’s — choosing. Since the mainstreaming of slacker culture in the 1990s, T-shirts have become a rudiment of zeitgeist fashion, and the messages they convey are profound in scope. Check out the “graphic tees” link at Urban Outfitters’ website and your eyes will glaze over at the (ahem) awesome commercial appeal of the cleverly worded tee.

Photographer Leslie Lyons set out in 2006 to document the purveyors of the genre. The Louisville native, who spent two decades living and working in New York City before returning a couple years ago, held open calls encouraging everyday folks to show up wearing a T-shirt that conveyed something — anything, really. And she got variety: Lyons has photographed hundreds of people from across the country in shoots bouncing from NYC to Austin, Texas, from Los Angeles to New Orleans.

Lyons will hold a similar session as part of the IdeaFestival next Thursday, Sept. 24, at 21c Museum Hotel in Louisville. Her project, called “Talking Back,” culminates in an Oct. 6 gallery show at the prestigious Art Directors Club in New York. One of the Louisville photos will be featured at the show.

Lyons, who also runs the website ILiveinLouisville.com, where she profiles the locals (disclosure: I have been one of them), has always preferred collaborating in her work, rather than simply generating art alone. In “Talking Back,” she says she wanted to explore symbols transmitted through popular culture in a gutty, street-level way.

“This was a way to collect some thoughts about what people have to say,” she says. “And some of them are clever and smart. Some of them aren’t even messages, per se — they’re just design elements or symbols. That was the point, to get real people to talk back.”

The photos are 4×5 Polaroids, but they’ll be blown up to life-size for the show. One, up now at 21c Museum, features a young Iranian woman wearing a T-shirt that bears the name of her country. Her hand is fixed in a two-fingered peace sign.

“T-shirt messaging is sometimes subtle and at other times in your face, but nevertheless is a fascinating insight into the personality of the individual and trends in contemporary culture,” he says.