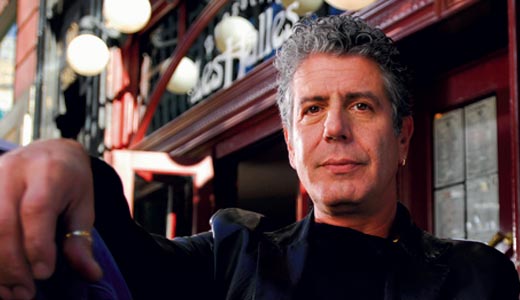 Upon scoring an interview with Anthony Bourdain in advance of his upcoming trip to Louisville, my mind raced with thoughts of how it would unfold: I’d impress him with knowledge of his work in a well-informed, non-stalker kind of way. Charmed and flattered, he would invite me to show him our best restaurants and watering holes. We would feast on Hot Browns and sip bourbon, then throw back beers at a local dive.

When it was all over, the chef-turned-television host would undoubtedly want to film an upcoming episode of the Travel Channel’s “No Reservations” in our city, perhaps asking me to be his guide.

To better plan our itinerary, I began the interview by asking Bourdain if he’d ever visited Louisville. His response: “I don’t think so.” I was baffled but undeterred. My dreams were completely dashed, however, when I learned Bourdain would only be here long enough to speak about his experiences as a renowned chef, best-selling author and world traveler as part of Louisville’s IdeaFestival.

It was a tough realization I quickly overcame as the acerbic Bourdain regaled me with Hunter S. Thompson-style tales ranging from poignant — like recounting his experience in war-torn Lebanon — to ridiculous — like ranting about his fear and loathing of Food Network star Sandra Lee.

LEO: Having spent years as a chef, what job would you say is more demanding: professional cook or world traveler?

Anthony Bourdain: No question — a chef’s work is much harder. It’s not even close. Your average working cook works far, far, far harder than anyone on television. It’s tough, difficult, physical work, requiring the ability to multitask, a strong back, coordination and a mental acuity, all of which were starting to fade around the time that I got into television, so it was very good timing.

LEO: You have a 2-year-old daughter. How has being a father changed you?

AB: Completely. One’s priorities are stood on their head. You find yourself willing at any second to step in front of a train if it’s in the interest of your child … I find myself regularly doing things I never would have thought I’d do in my life, if only for the temporary amusement of a 2-year-old. I watch an awful lot of Noggin and Nickelodeon and I know all the songs …

LEO: Didn’t you also quit smoking when your daughter was born?

AB: I did. Before my daughter was born, whether I lived or died was a personal decision. Now I feel sort of obliged to at least make an effort to live as long as I can in her life.

LEO: I recently watched a past episode filmed in Vietnam and it was clear you have a real love of that country. What is it that draws you to Vietnam?

AB: It’s a beautiful place; they’re crazy about food and they’re very proud of their cooking. It’s very hospitable and it fits in with my childhood notion of what the exotic East should look like. I love the flavors, the smells, the people — it just feels right.

LEO: I recently read that you would like to temporarily move your family to Vietnam. Is that still something you’re considering?

AB: I’d like to do it as soon as possible, probably for no more than a year. I mean, it’s a paradise. It would be a beautiful place to remember, looking back on your life. A childhood running around for a year in Vietnam I think would be a very happy memory for my daughter.

LEO: Is there any past destination you’ve visited that you were utterly surprised by, pleasantly or otherwise?

AB: Colombia was really one of the most surprising places I’ve been. It was just ridiculously hospitable; the food was great. To see Medellin, which was once one of the most dangerous cities on earth, drastically transform itself in such a short period was hugely encouraging. I’m often pretty pessimistic about the future of the world. I think now, if they could do it in Medellin, there’s no reason they can’t do it in Baltimore or Washington, D.C.

LEO: In contrast, did the violence you and your crew witnessed while filming in Lebanon in 2006 affect your worldview?

AB: I don’t know. I consider that to be great, unfinished business of my career. We are going back this year with the same crew; we are reassembling the same team that was trapped there. I came away from that experience very embittered, very angry and very pessimistic. I think the show we did kind of highlighted that. I’m hoping there’s a happy ending. I’m looking for one.

LEO: Obviously “No Reservations” is about food and travel, but is there anything else you’re trying to convey with the show?

AB: I don’t really have an agenda. When you’re traveling and eating, you can’t avoid seeing the elephant in the room. I mean, if you’re eating in a place where 90 percent of the daily meal is bread, that’s something worth mentioning. If you’re eating in a country like Cuba, where the people can’t leave and aren’t free to speak their minds, that’s the sort of thing I feel it’s necessary to acknowledge … But really all I’m looking to do is have a good time, whether I’m picking mushrooms with the head of counter-intelligence for the KGB, or blowing things up with Ted Nugent — it’s really all about food and beer.

LEO: Do you have a different approach when you’re filming in U.S. cities as opposed to abroad?

AB: We make an extra special effort to look at cities and states in my own country as if they were foreign countries. We’ve tried to look at places like Texas and Baltimore the way somebody from another country might look at them.

Something I kind of came to terms with a few years ago … I said, “How come I’m sneering at Texas when I’m so charmed by Vietnam? Why shouldn’t I open my mind to Texas or Montana the way I’ve been open to Asia and South America?” Once I sort of made that mental assessment, I’ve been enjoying my country a lot more.

LEO: Before setting out to do “No Reservations,” you worked briefly at the Food Network doing “A Cook’s Tour.” Since then you’ve given the Food Network and some of its stars a lot of flack. Would you rather spend an evening dining and drinking with Emeril, Rachel Ray or Sandra Lee?

AB: Emeril. I don’t even have to think about that. I like Emeril. We’re pretty friendly, actually. As I’ve many times told him cheerfully to his face, I never could stand his shows. I’ve had an awful good time making fun of him. But as a chef and a restaurant owner, I have always admired him — I just never liked the damn shows. I like Rachel Ray the talk show host a lot better than I like the cook. But Sandra Lee just scares me, and I think she should scare America. The message there is not good. I don’t think it’s a productive message she’s sending … She’s saying that laziness is good, that you can pour crap out of a can and it’ll be OK. The overt message and subliminal messages of the show are not good for the world.

LEO: Have you ever had the pleasure — or misfortune, I guess I should say — of meeting Sandra Lee?

AB: Yes, she came over and said hello at a party and pretty much just scared the living shit out of me. I was terrified. I stood there mute and paralyzed. She totally had her way with me and left me for dead. I was outmatched, let me tell you. She may look friendly, but once she gets those powerful hands around your neck, it’s all over quickly. She was smiling as she did it. If you’ve ever seen “Cape Fear,” it was that same sort of grinning menace. I thought about re-entering therapy afterward. It was really deeply upsetting.