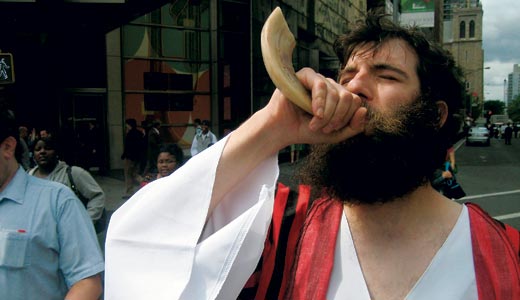 If you’re still practicing the ancient custom of reading books with some regularity, then A.J. Jacobs might come across your table. The editor-at-large at Esquire magazine could best be described as a literary stuntman known for committing to an activity for a full year and writing a book, often filled with self-ridicule, about the experience.

A favorite was “The Year of Living Biblically,” in which Jacobs spent 365 days following Scripture as literally as possible, including those lesser-known commandments that are often overlooked.

In a country that appears to totter on the brink of irrationality, Jacobs is trying to shake up our thinking by searching for ideas that attempt to answer an age-old philosophical question: How does one truly “know thyself” in the hustle of daily life? He’ll be here next week as part of the IdeaFestival.

LEO: Talk a little bit about your latest book, “The Guinea Pig Diaries.” What is it all about?

A.J. Jacobs: Well this one is kind of inspired by the Bible book. When I was living biblically, it was a weird year — I was dressed in robes and in sandals, and I had my beard. I was stoning adulterers with pebbles. That part I gave up at the end of the year, but there were so many things that stayed with me that really changed my life for the better and in a much more profound way than I thought. I decided the best way to change your life is to experiment and get out of your rut and try new things. This book is about trying different lifestyles to see what works and makes you happier.

LEO: What are some of the different lifestyles you did for the book?

AJ: One was I outsourced my entire life to a team of people out in Bangalore, India. They did everything for me. They answered my e-mail and answered my phone. They argued with my wife for me. They read bedtime stories to my son. There was another project called Radical Honesty, which is a movement started in Virginia where they believe you should never, ever lie. More than that, whatever is on your brain should come out of your mouth. It’s horrible … that one, in some ways, was the worst month of my life.

LEO: How did that complicate things for you?

AJ: Every interaction was fraught. You can’t imagine how much we lie to each other until you pay attention. I remember my wife and I went to a restaurant and saw some friends of hers from college. They said, “We should all get together,” and I had to say what was on my mind, which was, “No thanks, I don’t ever really want to see you again.” It was awkward. My wife wanted to strangle me.

LEO: What did you learn about humanity from following all the Bible’s commandments and reading the Encyclopedia Britannica from back to front in “The Know-It-All”?

AJ: From the Encyclopedia … the thing that really inspired optimism was that overall I think there were more highs than lows. We as a species have done pretty well. Progress is real. We are better than we used to be. Even with the horrors of the 20th century, with world wars and genocides, we are better off than we were 10,000 years ago. The per capita homicide is much, much lower, even counting all the wars.

LEO: Between believers and non-believers, do you get a more favorable reaction from either about “The Year of Living Biblically”?

AJ: I was nervous that people would be angry or it would be controversial. It was warmly received by both sides, and maybe this is boasting, but …

AJ: I am committing a biblical sin here. Please forgive me. But I was excited because it was on the cover of a Christian magazine the same month it was featured in Playboy and Penthouse. I bridged the sacred and the profane.

LEO: Both books dealt with the value and meaning of words. What’s the state of the written word in your opinion?

AJ: Unfortunately, the sky is falling. I talked about this in the Bible book. There is something wonderful and sacred about the written word. If you become too much of a society based on pictures and images, it changes the way you think for the worse.

LEO: Do you think social networking websites, text messaging and other shorthand communications have hurt or helped?

AJ: They are written in a sense … part of my research involved this question in The Atlantic: Is Google making us stupid? And the basic answer was yes. The writer argued it’s a different type of thinking when you’re reading online on Facebook. You’re jet skiing over the information, whereas reading a book is scuba diving in the information and thinking about it differently. It is a different experience.

LEO: We don’t read hieroglyphics anymore. Isn’t this just another evolution of the medium?

AJ: I don’t want to stop technology. I’m not a Luddite, but I also think that it’s more of a matter that we don’t read long. It’s the length of the text (that) is the problem. When everything is 200 words or 140 characters, you cannot account for the subtlety of reality.

LEO: What are some of the pitfalls of becoming the story?

AJ: It is all about the topic. There are a lot of people doing “my year of books” now; it’s like any other genre. Some of them are fantastic. I loved “Nickel and Dimed” and “Self-Made Man,” but then there are a lot I have no interest in that are so specific, like my year of learning how to play the tuba. Also, if you’re not passionate about the topic … it’s just empty.

LEO: There are a lot of irrational movements popping up. The 9/11 Truthers and the Birthers come to mind. People can believe things that are factually untrue. Is there a way we can solve that?

AJ: Our brains are, unfortunately, attracted to conspiracy theories. There are reasons for this. Back in caveman times, if you heard a rustle in the grass, in reality 99 times that’s going to be nothing, but one time it’s a tiger that will eat you. From an evolutionary point of view, it’s safer for the brain to assume it is a tiger. There’s very little cost to that. It’s a defensive mechanism, but it creates a distorted reality.

AJ: (Laughter) Exactly. Good one. It creates people like that. Our brains are built for caveman times, and we live in the silicon age. That is good when you’re getting chased by a rhinoceros, but if you’re in the Verizon store and a guy is rude to you, that’s totally counterproductive.

LEO: What’s the next big idea in the 21st century?

AJ: I am fascinated with behavioral economics … this is the study of how our brains often work irrationally and how we can try and correct it. Another big idea is humility. The idea that we can predict the future is vastly overestimated. It gets us into trouble.